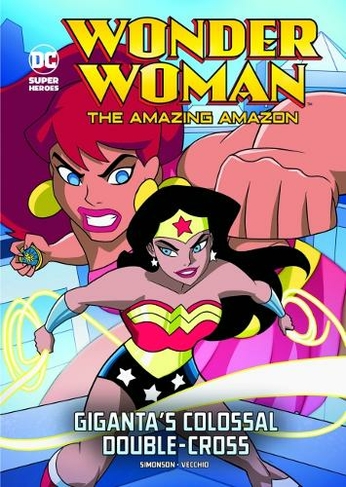 When a legendary Amazonian shield is stolen, Wonder Woman finds herself hot on the heels of Giganta and Gorilla Grodd. But soon she discovers that the villains aren't working together, and Giganta might be the Amazing Amazon's best hope for foiling Grodd's plans. Can Wonder Woman tame the titan long enough to pry the shield from the gorilla's grasp? Or will Giganta wind up wielding the weapon with a dastardly double-cross?

Luciano Vecchio currently lives in Buenos Aires, Argentina. With experience in illustration, animation, and comics, his works have been published in the US, Spain, UK, France, and Argentina. His credits include Ben 10 (DC Comics), Cruel Thing (Norma), Unseen Tribe (Zuda Comics), Sentinels (Drumfish Productions), and several DC Super Heroes books for Stone Arch Books. Louise Simonson writes about monsters, science fiction and fantasy characters, and superheroes. She wrote the award-winning Power Pack series, several best-selling X-Men titles, Web of Spider-man for Marvel Comics, and Superman: Man of Steel and Steel for DC Comics. She has also written many books for kids. She is married to comic artist and writer Walter Simonson and lives in the suburbs of New York City.