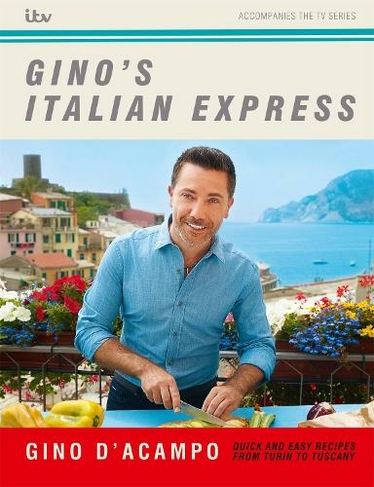 By Gino D'Acampo (Author)
Hardback
https://www.whsmith.co.uk/products/ginos-italian-express/gino-dacampo/hardback/9781529352252-12-000.html £16.00 rrp £20.00 Save £4.00 (20%)
GBP
Availability
In Stock
Free Delivery Available When You Spend £25 Or More
Details
Spend £25 On Eligible Products To Receive Free Standard Delivery To You Home Or Free Next Working Day Click And Collect To Store
Share

From bestselling cookery author, Gino D'Acampo, comes a brand-new cookbook inspired by a culinary journey along Italy's most famous rail journeys. Gino's Italian Express is a celebration of the delicious and authentic local foods Gino discovered on his train travels across beautiful Italy. Packed with 80 brand-new recipes, Gino shows you how to cook Italian dishes at home with minimal effort, pronto! Each recipe is in Gino's signature easy-to-follow style and perfect for both weeknight suppers and dinner parties alike. Including all the recipes from Gino's major ITV series coming in Autumn 2019, Gino's Italian Express is the must-have cookbook for those wishing for a taste of Italy.

Gino was born in Napoli in the south of Italy into a large family. The food they ate was very traditional - simple recipes based on fresh and healthy fruit, vegetables, fish and meat.'My grandfather said that a good recipe doesn't need many ingredients because if the ingredients are good quality and full of flavour, why do you have to cover up or change their taste'. This is a philosophy Gino has stuck to since he first started in the kitchen. After training at the Luigi de Medici Catering College, Gino came to London at 19 and worked at The Orchard Restaurant in Hampstead and then at the Cambio restaurant in Surrey.Gino has appeared on many primetime TV shows in his career. He is currently a regular on ITV's flagship programme This Morning and his new eight part ITV series Gino's Italian Express starts on ITV in November. Gino will also be back on our screens in 2020 alongside Gordon Ramsay and Fred Sirieix for a second series of their highly popular show Gordon, Gino and Fred's Road Trip. Gino is the author of several best-selling books including Gino's Healthy Italian for Less, Gino's Italian Coastal Escape, Gino's Italian Escape and Gino's Italian Adriatic Escape and Gino's Hidden Italy.He has 9 Gino D'Acampo My Restaurant around the UK - in Manchester, London, Birmingham, Harrogate, Hull, Leeds and Liverpool - and three London My Pasta Bar. He is married to Jessica and they have three children, Luciano, Rocco and Mia.