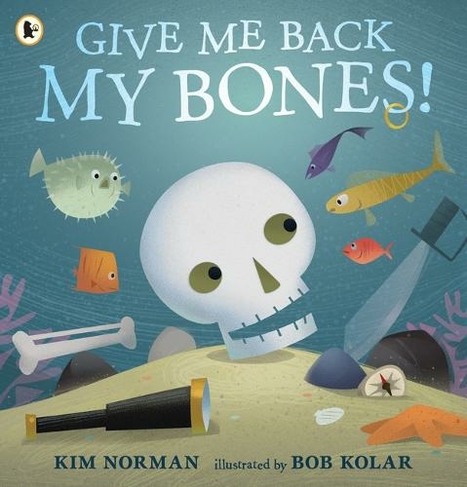 Give Me Back My Bones!

A pirate skeleton seeks to put its bones back together in this rhyming first book of anatomy! Cast a spyglass 'round here, while breakers curl and pound here. There's treasure to be found here - I feel it in my bones! A stormy night at sea has uncovered some long-buried secrets and surprises. Is that the mast of a shipwreck? A faded pirate hat? And what's that hiding in the sand? A mandible and a clavicle, phalanges and femurs, a tibia and a fibula - could there be a complete set of bones scattered across the ocean floor? And who might they belong to? A jaunty rhyme takes readers on an underwater scavenger hunt as a comical skeleton tries to put itself back together piece by piece. Make no bones about it - this rollicking read-aloud will have young ones learning anatomy without even realizing.

Kim Norman is a poet, writer and graphic artist. She has written many children's books, including Crocodaddy, illustrated by David Walker; Ten on the Sled, illustrated by Liza Woodruff; I Know a Wee Piggy, illustrated by Henry Cole; This Old Van; The Bot that Scott Built; and Still a Gorilla. She has two grown sons, loves musical theatre, and even had a paying gig as a singer for a big band. Find Kim online at kimnormanbooks.com and on Twitter as @KimNormanAuthor.Bob Kolar is the author-illustrator of many books, including Big Kicks. He is also the illustrator of Nothing Like a Puffin by Sue Soltis, the AlphaOops books by Alethea Kontis, and Slickety Quick: Poems about Sharks by Skila Brown.