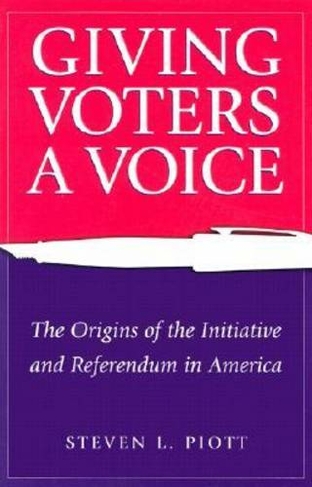 Giving Voters a Voice: The Origins of the Initiative and Referendum in America

By Steven L. Piott (Author)
Hardback
https://www.whsmith.co.uk/products/giving-voters-a-voice-the-origins-of-the-initiative-and-referendum-in-america/steven-l-piott/hardback/9780826214577-01-000.html £51.95
GBP
Availability
Currently unavailable. We don't know when or if this item will be back in stock
With Free Saver Delivery
Details
FREE SHIPPING over £20 for Saver Delivery
Share

Giving Voters a Voice studies the origins of direct legislation, one of the most important political reforms enacted during the Progressive Era. Steven L. Piott begins with the source of the idea in the United States and proceeds to the earliest efforts aimed at generating a national movement to expand the parameters of popular democracy in the 1890s. He then broadens his examination to include the unique ways in which twenty-two states came to enact legislation allowing for the statewide initiative and referendum between 1898 and 1918. The book's appendix offers the only comprehensive listing of all the ballot propositions and vote totals for the period. Most historians of the Progressive Era have concluded that narrow self-interest prevented labor, farmers, and the middle class from working together to achieve important reforms. Giving Voters a Voice demonstrates that middle-class reformers, trade unionists, and farm organizers formed loose political coalitions and directed grass-roots campaigns to gain passage of initiative and referendum statutes because direct legislation offered the best means to correct political, economic, and social abuses. But there was more than just a shared sense of common interest that brought these seemingly oppositional groups together. What really made them willing to speak, lobby, and work together was quite simply the frustration felt by voters who sensed that they had become economically dependent and politically powerless. Each state in which proponents conducted an active campaign to win adoption of direct legislation is studied in detail. The book analyzes the crucial roles played by individuals who led the movement to empower voters by enabling them to enact or veto legislation directly, and reveals the arguments, the stumbling blocks, and political compromises that are often slighted in generalized overviews. Each state possessed its own political dynamic. Giving Voters a Voice offers the reader a richness of detail and a completeness of coverage not found elsewhere. bibliography, tables, index

Steven L. Piott is Professor of History at Clarion University in Clarion, Pennsylvania. He is the author of The Anti-Monopoly Persuasion: Popular Resistance to the Rise of Big Business in the Midwest and Holy Joe: Joseph W. Folk and the Missouri Idea (University of Missouri Press).