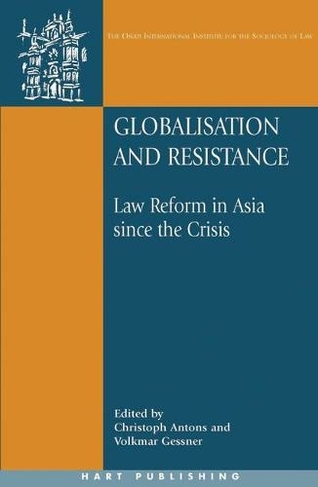 Globalisation and Resistance: Law Reform in Asia Since the Crisis (Onati International Series in Law and Society 20)

In comparing existing research on Eastern and Central Europe, Central Asia and Latin America, it is clear that legal developments in East and South Asian societies are somewhat under-researched. This volume fills a gap in studies of the effects of globalisation and the role of law in processes of globalisation. What the book contributes to the debate is an "area study", that is interdisciplinary research pertaining to a particular geographical or cultural region. The region discussed here presents an ideal testing ground for legal pluralism, for economic, cultural, and political influences on the role of law in development. The 'developmental states' of Asia are regarded as refuting both Latin American dependency theory and classical modernisation theory. They seem to follow quite distinct political, economic and legal developments. However, especially after the Asian Crisis, their approaches have come under intense pressure. The book examines the resulting reform efforts and the tensions they generate in areas such as constitutional and administrative law, commercial law and human rights.