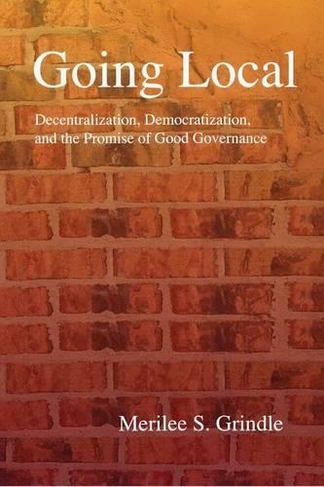 Going Local: Decentralization, Democratization, and the Promise of Good Governance

Many developing countries have a history of highly centralized governments. Since the late 1980s, a large number of these governments have introduced decentralization to increase democracy and improve services, especially in small communities far from capital cities. In Going Local, an unprecedented study of the effects of decentralization on thirty Mexican municipalities, Merilee Grindle describes how local governments respond when they are assigned new responsibilities and resources under decentralization policies. She explains why decentralization leads to better local governments in some cases--and why it fails to in others. Combining quantitative and qualitative methods, Grindle examines data based on a random sample of Mexican municipalities--and ventures into town halls to follow public officials as they seek to manage a variety of tasks amid conflicting pressures and new expectations. Decentralization, she discovers, is a double-edged sword. While it allows public leaders to make significant reforms quickly, institutional weaknesses undermine the durability of change, and legacies of the past continue to affect how public problems are addressed. Citizens participate, but they are more successful at extracting resources from government than in holding local officials and agencies accountable for their actions. The benefits of decentralization regularly predicted by economists, political scientists, and management specialists are not inevitable, she argues. Rather, they are strongly influenced by the quality of local leadership and politics. 7 Maps

Merilee S. Grindle is Edward S. Mason Professor of International Development at the Kennedy School of Government and Director of the David Rockefeller Center for Latin American Studies at Harvard University. She is the author, most recently, of "Despite the Odds: The Contentious Politics of Education Reform" (Princeton).