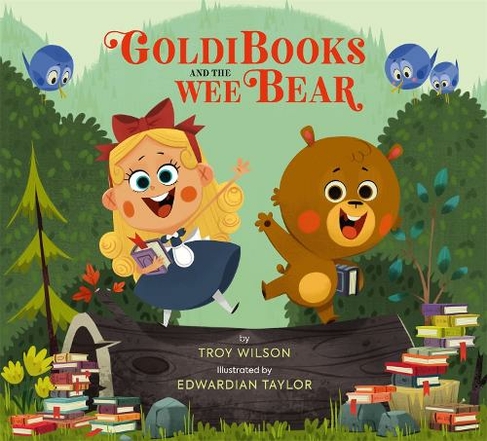 Goldibooks and the Wee Bear

In this adorable reimagining of the beloved classic, Wee Bear is on the hunt for something new to read. As he sets off through the woods, he stumbles upon Goldibooks's house. While she and her parents are out for a walk, Wee Bear makes himself at home. But Mama's books are too hard (hardcovers) and Papa's are too soft (paperbacks). Thankfully, Goldibooks's book collection is juuuust right! With a pile of books in-hand, Wee Bear sits down to read. But Mama's chair is too hard, and Papa's chair is too soft. Thankfully, Goldibook's chair is juuuuust right! Exhausted from reading so many books, Wee Bear tucks himself into bed. But Mama's bed is too hard, and Papa's bed is too soft. Thankfully, Goldibooks's bed is juuuust right! And that's where Goldibooks and her parents find him when they return home from their walk. As the story unfolds from there, readers are reminded that the best books are those we share with friends. 32 Illustrations, color

Troy Wilson is the author of several picture books, including Little Red Reading Hood and the Misread Wolf, and has published numerous stories in children's magazines. Troy lives in Victoria, BC.Edwardian Taylor was born and raised in Honolulu, Hawaii. His character designs, storyboards, and concept art can be seen in mobile games, TV, films, and commercials. He's worked with clients like Dreamworks/Universal Studios, Disney, Reelfx, Flight School, Out of Order Studios, Sesame Studios, Spin Masters Studios, and many more.