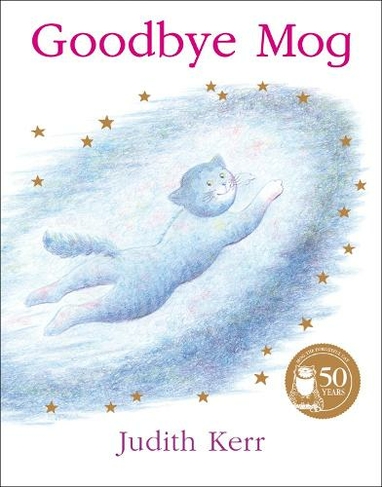 By Judith Kerr (Author)
Paperback
https://www.whsmith.co.uk/products/goodbye-mog/judith-kerr/paperback/9780007149698-12-000.html £5.94 rrp £6.99 Save £1.05 (15%)
GBP
Availability
In Stock
Free Delivery Available When You Spend £25 Or More
Details
Spend £25 On Products To Receive Free Standard Delivery To Your Home Or Free Next Working Day Click And Collect To Store

Share in fifty years of a really remarkable cat... Say goodbye to MOG in this incredibly moving and stunningly illustrated story from Judith Kerr, creator of The Tiger Who Came to Tea and the MOG series. Celebrate the fiftieth anniversary of Mog the Forgetful Cat with special anniversary editions of her much-loved adventures. Mog was tired. She was dead tired... Mog thought, 'I want to sleep for ever.' And so she did. But a little bit of her stayed awake to see what would happen next. Join the Thomas family as they say goodbye to their dear pet Mog, and get a new kitten. It could all be a disaster, but Mog is still there to help... A touching tribute to a character beloved for fifty years, Goodbye Mog is the perfect story for a gentle introduction to the subjects of grief and bereavement, with the one and only MOG herself. Mog the Forgetful Cat was first published fifty years ago, and Mog has been delighting children all over the world with her adventures ever since. These books are the perfect gifts for boys, girls and families everywhere.

Judith Kerr OBE was born in Berlin. Her family left Germany in 1933 to escape the rising Nazi party, and came to England. She studied at the Central School of Art and later worked as a scriptwriter for the BBC. Judith married the celebrated screenwriter Nigel Kneale in 1954. She left the BBC to look after their two children, who inspired her first picture book, The Tiger Who Came to Tea. Published in 1968 and never out of print in the fifty years since, it has become a much-loved classic and perennial bestseller. Her second book was Mog the Forgetful Cat, which was published in 1970 and has also gone on to become a beloved classic, with Mog appearing in a further 17 adventures in the years since. Judith was awarded the Booktrust Lifetime Achievement Award in 2016, and in 2019 was named Illustrator of the Year at the British Book Awards. Judith died in May 2019 at the age of 95, and her stories continue to entertain and delight generations of children.