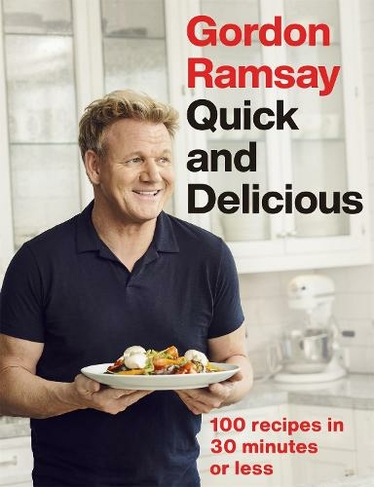 Create chef-quality food without spending hours in the kitchen. With unlimited access to recipes, why does anyone need another cookbook? Because not all recipes are born equal. Not all of them have been created by a global superstar chef who has built his reputation on delivering the very best food - whether that's the ultimate fine dining experience at his 3 Michelin-star Restaurant Gordon Ramsay or the perfectly crafted burger from his Las Vegas burger joint. Over the course of his stellar career, Gordon has learnt every trick in the trade to create dishes that taste fantastic and that can be produced without fail during even the most busy service. Armed with that knowledge, he has written an inspired collection of recipes for the time-pressed home cook who doesn't want to compromise on taste or flavour. The result is 100 tried and tested recipes that you'll find yourself using time and again. All the recipes take 30 minutes or less and use readily available ingredients that are transformed into something special with Gordon's expertise. Full colour

Scottish by birth, Gordon Ramsay was brought up in Stratford-upon-Avon, England, and initially aspired to be a professional footballer. However, when an injury prematurely put an end to any hopes of a promising career on the pitch, Ramsay went back to college to complete a course in hotel management. His dedication and natural talent led him to train with some of the world's leading chefs.Now internationally renowned and holding seven Michelin stars, Ramsay has opened 34 restaurants globally including Europe, America, Asia and the Middle East. Ramsay has also become a star of the small screen in the US and UK, and earned himself an EMMY nomination in 2017. Ramsay has released a number of books, many of which have become bestsellers around the world; his latest cookbook is Quick and Delicious.A keen triathlete, Gordon lives with his wife Tana and five children, Megan, twins Jack & Holly, Tilly and newest member of the family, Oscar. He divides his time between London, Los Angeles and Cornwall.