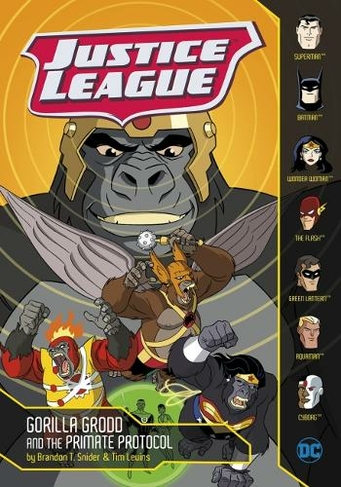 Gorilla Grodd and the Primate Protocol

When Gorilla Grodd escapes from prison, Wonder Woman, Hawkman and Green Lantern lead a team of heroes and capture him. Little do they know, the helmet Grodd uses to boost his powers has been rigged for primate pandemonium. In an instant, most of the team's members transform into apes! Can the Justice League fight through Grodd's gorilla grip? Or will New York City fall to a super-simian onslaught?

Brandon T. Snider has authored over 50 books featuring pop culture icons such as Captain Kirk, Transformers and the Muppets. Additionally, he's written books for Cartoon Network favorites such as Adventure Time, Regular Show, and Powerpuff Girls. His award-winning Dark Knight Manual was mentioned in Entertainment Weekly, Forbes, and Wired. Brandon lives in New York City and is a member of the Writer's Guild of America. To find out more visit cootiekid.com. Tim Levins is best known for his work on the Eisner Award-winning DC Comics series Batman: Gotham Adventures. Tim has illustrated other DC titles, such as Justice League Adventures, Batgirl, Metal Men, and Scooby Doo, and has also done work for Marvel Comics and Archie Comics. Tim enjoys life in Midland, Ontario, Canada, with his wife, son, dog, and two horses.