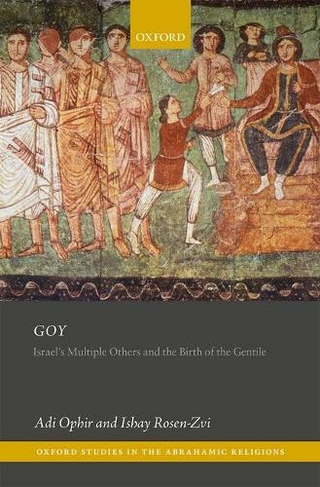 Goy: Israel's Multiple Others and the Birth of the Gentile (Oxford Studies in the Abrahamic Religions)

Also available on eBook for £63.83. Click here to purchase from Rakuten Kobo

Goy: Israel's Others and the Birth of the Gentile traces the development of the term and category of the goy from the Bible to rabbinic literature. Adi Ophir and Ishay Rosen-Zvi show that the category of the goy was born much later than scholars assume; in fact not before the first century CE. They explain that the abstract concept of the gentile first appeared in Paul's Letters. However, it was only in rabbinic literature that this category became the center of a stable and long standing structure that involved God, the Halakha, history, and salvation. The authors narrate this development through chronological analyses of the various biblical and post biblical texts (including the Dead Sea scrolls, the New Testament and early patristics, the Mishnah, and rabbinic Midrash) and synchronic analyses of several discursive structures. Looking at some of the goy's instantiations in contemporary Jewish culture in Israel and the United States, the study concludes with an examination of the extraordinary resilience of the Jew/goy division and asks how would Judaism look like without the gentile as its binary contrast.

Adi Ophir is Professor Emeritus at The Cohn Institute for the History and Philosophy of Science and Ideas at Tel Aviv University and a Visiting Professor in the Humanities at the Cogut Center of the Humanities, Brown University. He was Director of the Lexicon for Political Theory research project at The Minerva Humanities Center. He was also the founding editor of Theory and Criticism, the main Hebrew journal for critical theory, and of the online journalMafte'akh: Lexical Review for Political Thought, and member of the editorial board of Political Concepts: A Critical Lexicon. His publications include The One-State Condition: Occupation and Democracy in Israel/Palestine (Stanford University Press; 2012), Power of Inclusive Exclusion: Anatomy of Israeli Rule inthe Occupied Palestinian Territories, and The Order of Evils: Toward an Ontology of Morals (MIT Press, 2005).Ishay Rosen-Zvi is a Professor in the Department of Jewish Philosophy at Tel Aviv University and head of the Talmud section. He previously taught Talmud and Midrash at the University of California at Berkeley and was a fellow at the Scholion Institute at the Hebrew University of Jerusalem. In 2013 he was elected to the Young Israeli Academy of Science. He is the author of Demonic Desires: "Yetzer Hara" and the Problem of Evil in Late Antiquity (University of Pennsylvania Press, 2011)and The Mishnaic Sotah Ritual: Temple, Gender and Midrash (Brill, 2012).