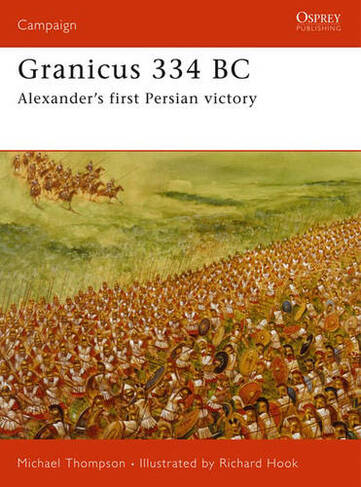 Granicus River was Alexander's first great victory over the Persians, where he demonstrated the heroic style of active and decisive leadership that was the hallmark of his career. In the initial engagement, Alexander's 5,000 cavalry, supported by archers and javelin men, routed a force of 20,000 Persian cavalry This convincing victory was the springboard for the subjugation of the coastal cities, the neutralisation of the Persian navy and ultimately the conquest of the Persian Empire. Exploring the courageous leadership of one of the world's most inspirational yet ruthless leaders, this book provides a detailed analysis of the battle, strategy and tactics of the forces engaged. Illustrations (some col.)

Michael Thompson has a Masters Degree in ancient history from Oxford, where he wrote a thesis on the political and military career of the Hellenistic monarch Demetrius Poliorcetes (the 'Besieger'). He also has degrees in philosophy from universities in the United States. He has had a long interest in military history, including academic work, archaeology and gaming. He currently lives in Oxford, UK. The author lives in Oxfordshire, UK.