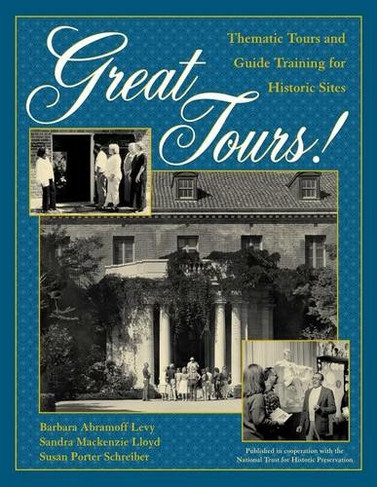 Creating tours that are interesting and educational for visitors (and guides!) is a challenge every historic site faces. Great Tours! helps you focus clearly on the material culture and significance of your site and then shows you how to use that focus to train and energize your guides. You will be able to move your tours to a fresh new level that is engaging and educational for visitors of all ages and abilities. Readings and workshop activities frame the process throughout and allow you to develop what is most appropriate for your site, while working to strike a realistic balance between ideals and every day reality. Great Tours! offers a unique combination of theoretical guidance and practical activities, supplemented by reproducible forms and a bibliography and index, that make it an invaluable resource for anyone involved with planning tours and training guides. Published in cooperation with the National Trust for Historic Preservation. Visit their web page.

Barbara A. Levy first practiced her interpretation skills as a choral conductor, singer, and music teacher. Although she moved on to work in the historic site field, her experiences in music and teaching confirmed her belief that interpretation in any field required understanding and effective communication. Her professional commitment to creating great interpretive experiences at historic sites began when she was the Interpretation Planner for the Massachusetts Department of Environmental Management, Planning Division, and continued when she became Director of Education and Interpretation for the Society for the Preservation of New England Antiquities. In 1993 she founded Barbara Levy Associates, a consulting group that has helped history museums and historical organizations across the country improve their interpretation, planning, and education programs. Well known as a skilled interpretive planner, teacher, and trainer, she is also a frequently requested presenter at regional and national professional conferences. She holds a B.M.A (with distinction) from the University of Michigan, and both M.M.A and M.A degrees from Boston University. Sandy Mackenzie Lloyd first interpreted history to the public as a kindergartner when she wrote, directed, and starred in a play about Betsy Ross. A year later she began collecting antiques and she was hooked. Her combined love of history and "things" led to a degree in American Studies from Smith College and the Winterthur Program in Early American Culture. She was the first curator of Wyck, a historic house in Philadelphia, and the curator of education at Cliveden, a property of the National Trust. She has written several Historic Structures Reports for significant buildings in Philadelphia, given tours of historic sites for over twenty years, conducted guide training, lectured, and taught the toughest historic site audience-school children. She lives in Philadelphia with her family where she works as a museum consultant to many historic sites including Pennsbury M