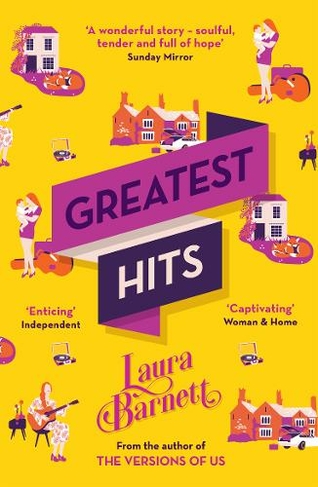 Greatest Hits: From the bestselling author of The Versions of Us

'Barnett has that rare talent, like Curtis Sittenfeld or Kate Atkinson, of building up the mundane aspects of everyday life until they acquire meaning' THE TIMES 'Barnett excels herself in this mesmerising ballad of a book...Greatest Hits is not just about music, it's about people: their ambitions, friendships and flaws. An absolute must read' STYLIST If you could choose just sixteen moments to define your entire life, what would they be? Cass Wheeler has seen it all - from the searing heights of success, to earth-shattering moments of despair. She has known passion, envy, pride, fear, and love. She has been a daughter, a mother, a singer, a lover. A musician born in 1950, Cass is now taking one day to select the sixteen songs in her repertoire that have meant the most to her. And behind each song lies a story - from the day her mother abandoned her, to her passionate first love, to the moment she lost everything. The dreams, the failures, the second chances. But what made her disappear so suddenly from her public life and, most importantly, can she find her way back? 'The mother/daughter relationship is the most moving aspect ofthis excellent book...This engaging, emotionally charged novel about music,motherhood and mental illness deserves to be a hit' OBSERVER What readers are saying about GREATEST HITS: 'A brilliant and unusual read...There is real emotional power to Cass's story and you really feel it in the narrative....It gives an unfiltered personal history, with joy, love, failures, regrets and all that it takes to live delivered beautifully' Goodreads 5 star review 'Truly, truly wonderful in every way imaginable and I can't recommend it highly enough' Goodreads 5 star review 'A triumphant second book to follow up to The Versions of Us which I also adored' Goodreads 5 star review 'A truly unique and memorable novel. Definitely one of the best novels so far this year' Goodreads 5 star review 'Filled with characters who burst from the page, dealing with almost unbearable sorrows and incredible highs, Greatest Hits is an absolute triumph. I loved every single page' Goodreads 5 star review

Laura Barnett was born in 1982 in south London, where she now lives with her husband. She studied Spanish and Italian at Cambridge University, and newspaper journalism at City University, London.As a freelance arts journalist, features writer and theatre critic, Laura has worked for the GUARDIAN, the OBSERVER, the DAILY TELEGRAPH and other national newspapers and magazines. Her first non-fiction book, ADVICE FROM THE PLAYERS - a compendium of advice for actors - was published in 2014 by Nick Hern Books.THE VERSIONS OF US, her debut novel, was a number one bestseller and has been translated into 23 languages. TV rights have been optioned by Trademark Films. Her second novel, GREATEST HITS, was published in 2017, along with an accompanying soundtrack by Kathryn Williams.@laura_jbarnett www.laura-barnett.co.uk www.versionsofus.com