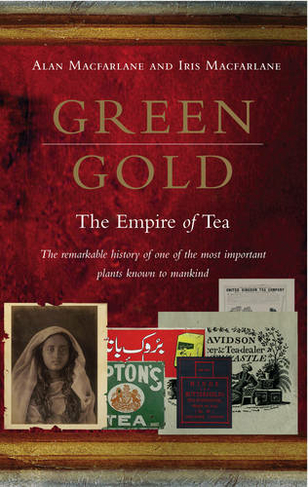 Green Gold: The Empire of Tea

Apart from water, tea is more widely consumed than any other food or drink. Tens of billions of cups are drunk every day. How and why has tea conquered the world? Tea was the first global product. It altered life-styles, religions, etiquette and aesthetics. It raised nations and shattered empires. Economies were changed out of all recognition. Diseases were thwarted by the magical drink and cities founded on it. The industrial revolution was fuelled by tea, sealing the fate of the modern world. Green Gold is a remarkable detective story of how an East Himalayan camellia bush became the world's favourite drink. Discover how the tea plant came to be transplanted onto every continent and relive the stories of the men and women whose lives were transformed out of all recognition through contact with the deceptively innocuous green leaf.

Professor Alan Macfarlane is Professor of Social Anthropology at the University of Cambridge. He is the world's foremost expert on tea and its social impact and has been the principle social expert on the acclaimed Channel Four series The Day the World Took Off. Iris Macfarlane is Alan's mother and was for many years married to a tea-planter in Assam. She wrote for History Today in the 1960s and has published many books most notable her translations of Assamese and Gaelic folk stories. In the early 1990s Iris appeared extensively on the BBC British Empire series Ruling Passions.