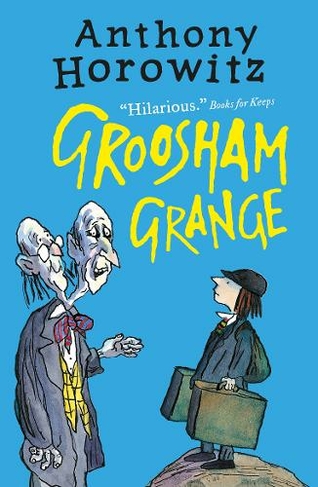 By Anthony Horowitz (Author)
Paperback
https://www.whsmith.co.uk/products/groosham-grange/paperback/9781406361681-12-000.html £5.94 rrp £6.99 Save £1.05 (15%)
GBP
Availability
In Stock
Free Delivery Available When You Spend £25 Or More
Details
Spend £25 On Products To Receive Free Standard Delivery To Your Home Or Free Next Working Day Click And Collect To Store

A hilarious, spooky tale from the number one bestselling author Anthony Horowitz. A wickedly funny story by the number one bestelling author Anthony Horowitz, with brand new illustrations by Tony Ross. Sent to Groosham Grange as a last resort by his parents, David Eliot quickly discovers that his new school is a very weird place indeed. New pupils are made to sign their names in blood; the French teacher disappears every full moon; the assistant headmaster keeps something very chilling in his room... What's the meaning of the black rings everyone wears? Where do the other pupils vanish to at night? Most important of all, how on earth can David get away - alive?

Anthony Horowitz is the author of the number one bestselling Alex Rider books and The Power of Five series. He has enjoyed huge success as a writer for both children and adults, most recently with the latest adventure in the Alex Rider series, Russian Roulette ,and the highly acclaimed Sherlock Holmes novels The House of Silk and Moriarty. Anthony was also chosen by the Ian Fleming estate to write the new James Bond novel, Trigger Mortis, which will be published this year. Anthony has won numerous awards, including the Bookseller Association/Nielsen Author of the Year Award, the Children's Book of the Year Award at the British Book Awards, and the Red House Children's Book Award. Anthony was awarded an OBE for Services to Literature. He has also created and written many major television series, including Injustice, Collision and the award-winning Foyle's War.