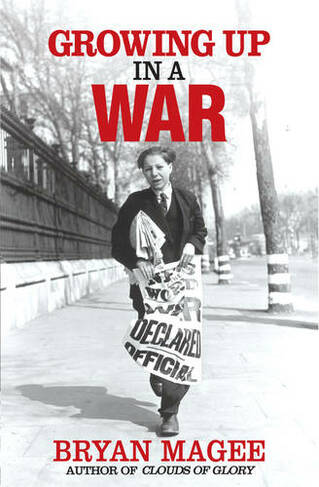 Growing Up In A War

This utterely compelling memoir opens with a sceptical nine-year-old Bryan Magee being taught the facts of life. It goes on to tell the story of the Second World War as seen through a child's eyes. Growing Up in a War nostalgically evokes the atmostphere of wartime England, the community spirit of a society before television, where very few had cars or telephones. A kid from the East End, he won a scholarship to one of the country's ancient public schools. During the school holidays, he returned to London and the air raids, the doodlebugs and V2 rockets. With the war over, Bryan's school sent him to a Lycee in Versailles, and he explored the Paris of those post-war years. Then, back in England, he tumbled into his first love affair. The book comes to an end with his call-up into the army, and his unexpected posting to the School of Military Intelligence. Growing Up in a War is a stunning autobiography and account of Britain during an extraordinary period of history, by the winner of the J.R. Ackerley Prize for autobiography.

Bryan Magee has had a many-sided career. In the 1960s and '70s, he worked in broadcasting as a current affairs reporter on ITV and a critic of the arts on BBC Radio 3. At one time he taught philosophy at Oxford, where he was a tutor at Balliol College. His best-remembered television programmes are two long series about philosophy: for the first he was awarded the Silver Medal of the Royal Television Society, while the book on which he based the second series on was a bestseller. From 1974 to 1983 he was Member of Parliament for Leyton, first as Labour, then as a Social Democrat and he is now a full-time author. Clouds of Glory, was awarded the J. R. Ackerley Prize for autobiography. He has also written several books on the history of philosophy. His books have been translated into more than twenty languages.