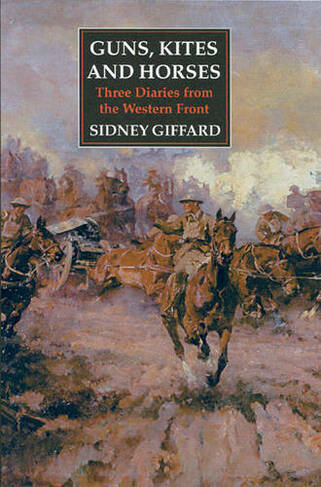 Guns, Kites and Horses: Three Diaries from the Western Front

The personal diaries kept by three of the six Giffard brothers who fought in the Great War (three of them as Horse Gunners), provide a vivid record of service on the Western Front in World War I and stand witness to a lost generation through which the war cut its huge and deadly swathe. Jack Giffard served in the Royal Horse Artillery and was in the famous retreat from Mons. He was briefly captured and wounded and was the only officer to survive the great battle at Nery. Eddie Giffard was a Field Gunner supporting the Guards Division, rose to be Battery Commander and was killed shortly before the Armistice. Walter Giffard served in balloons in the Royal Flying Corps - a dangerous and often under-valued aspect of the war. This memoir conveys a striking and immediate sense of what it was really like - from everyday details, to boredom, intense danger, wounds and even death. There is a matter-of-factness about the entries but still a tender concern for suffering - comrades and their horses. The comments of the balloonist brother, Walter, combine a lightness of touch with a sense of history, as when he watches the great German offensive in the Spring of 1918: "the most colossal battle, both in magnitude and importance, that the world has ever seen". 24 b&w illustrations

Sydney Giffard, decendant of the diarists, served in HM Diplomatic Service and was HM Ambassador to Japan and Switzerland during the 1980s. He is an Honorary Fellow of Wadham College, Oxford. Other publications by this author include 'Japan Among the Powers 1890-1990' (Yale 1994)