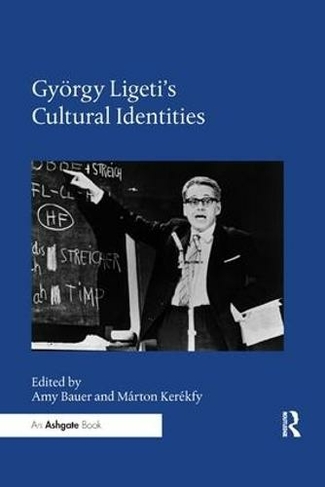 Since Gyoergy Ligeti's death in 2006, there has been a growing acknowledgement of how central he was to the late twentieth-century cultural landscape. This collection is the first book devoted to exploring the composer's life and music within the context of his East European roots, revealing his dual identities as both Hungarian national and cosmopolitan modernist. Contributors explore the artistic and socio-cultural contexts of Ligeti's early works, including composition and music theory, the influence of East European folk music, notions of home and identity, his ambivalent attitude to his Hungarian past and his references to his homeland in his later music. Many of the valuable insights offered profit from new research undertaken at the Paul Sacher Foundation, Basel, while also drawing on the knowledge of long-time associates such as the composer's assistant, Louise Duchesneau. The contributions as a whole reveal Ligeti's thoroughly cosmopolitan milieu and values, and illuminate why his music continues to inspire new generations of performers, composers and listeners. 51 Line drawings, black and white; 27 Halftones, black and white; 1 Tables, black and white

Amy Bauer is Associate Professor of Music at the University of California, Irvine. She received her PhD in music theory from Yale University, and has published articles in Music Analysis, The Journal of Music Theory, Contemporary Music Review, Indiana Theory Review and Ars Lyrica, and book chapters on the music of Ligeti, Messiaen, Chavez, Lang, the television musical, modernist opera and issues in the philosophy and reception of modernist music. Her monograph Ligeti's Laments: Nostalgia, Exoticism and the Absolute (2011) provides a critical analysis of the composer's works, considering both the compositions themselves and the larger cultural implications of their reception.Marton Kerekfy is Research Fellow at the Budapest Bartok Archives, Editor of the Bela Bartok Complete Critical Edition and Editor-in-Chief at Editio Musica Budapest. He studied musicology and composition at the Franz Liszt Academy of Music in Budapest and received his PhD in musicology from the same institution. His doctoral thesis (2014) explores the influence of East European folk music in Gyoergy Ligeti's music. He has published articles on the music of Ligeti and Bartok in, among others, Tempo, Studia Musicologica and Mitteilungen der Paul Sacher Stiftung. He translated into Hungarian and edited Ligeti's selected writings (2010).