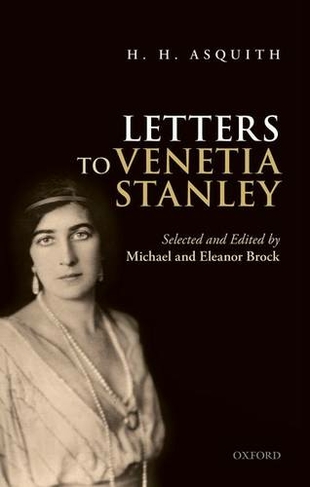 H. H. Asquith fell in love with Venetia Stanley in the spring of 1912. Over the next three years he wrote to her whenever he could not see her: sometimes three times a day, sometimes during a debate in the house of Commons, on occasion even during a Cabinet meeting. He shared many political and military secrets with her and wrote freely of his colleagues in government, who included LLoyd George, Churchill, and Kitchener. The correspondence ended abruptly in May 1915 when Venetia told Asquith of her engagement to a junior Cabinet Minister, Edwin Montagu. The Prime Minister, who was at a crisis in his political fortunes, confessed himself utterly heart-broken. This reissue of Asquith's letters to Venetia Stanley includes explanatory notes from Michael and Eleanor Brock, two of the leading authorities in the field. This volume documents a romance, and yet is vital reading for anyone interested in the history of World War I or in British politics of the time. 30 black and white figures, 2 maps

Michael Brock is a modern historian, educationalist, and Oxford college head; he was Vice-President of Wolfson College; Director of the School of Education at Exeter University; Warden of Nuffield College, Oxford; and Warden of St George's House, Windsor Castle; he is the author of The Great Reform Act, and co-editor, with Mark Curthoys, of the two nineteenth-century volumes in the History of the University of Oxford. With his wife, Eleanor Brock, aformer schoolteacher, he has recently edited a new collection of Margot Asquith's Great War Diaries.