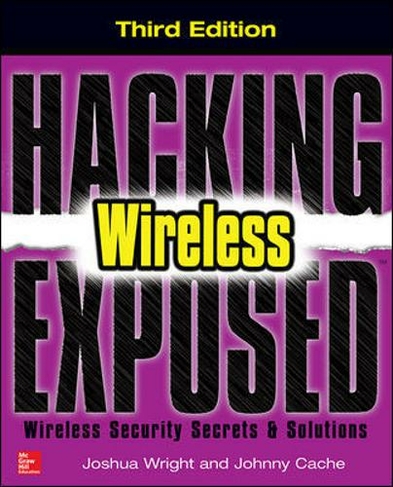 Joshua Wright (Rhode Island) is a senior technical analyst with Counter Hack, and a senior instructor and author for the SANS Institute. Through his experiences as a penetration tester, Josh has worked with hundreds of organizations on attacking and defending mobile devices and wireless systems, disclosing significant product and protocol security weaknesses to well-known organizations. As an open-source software advocate, Josh has conducted cutting-edge research resulting in several software tools that are commonly used to evaluate the security of widely deployed technology targeting WiFi, Bluetooth, ZigBee, and Z-Wave wireless systems, smart grid deployments, and the Android and Apple iOS mobile device platforms. In his spare time, Josh looks for any opportunity to void a warranty on his electronics. Johnny Cache (Virginia) received his Masters in Computer Science from the Naval Postgraduate School in 2006. His thesis work, which focused on fingerprinting 802.11 device drivers, won the Gary Kildall award for the most innovative computer science thesis. Johnny wrote his first program on a Tandy 128K color computer sometime in 1988. Since then he has spoken at several security conferences including BlackHat, BlueHat, and ToorCon. He has also released a number of papers related to 802.11 security, and is the author of many wireless tools. He is the founder and Chief Science Officer of Cache Heavy Industries.