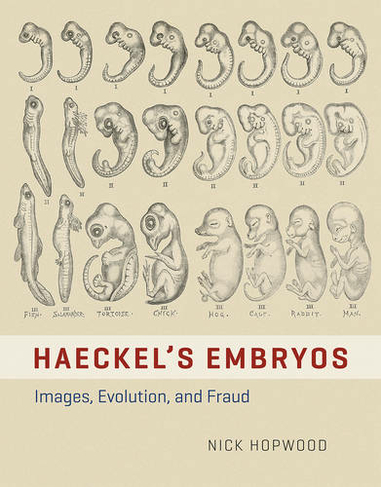 Pictures from the past powerfully shape current views of the world. In books, television programs, and websites, new images appear alongside others that have survived from decades ago. Among the most famous are drawings of embryos by the Darwinist Ernst Haeckel in which humans and other vertebrates begin identical, then diverge toward their adult forms. But these icons of evolution are notorious, too: within months of their publication in 1868, a colleague alleged fraud, and Haeckel's many enemies have repeated the charge ever since. His embryos nevertheless became a textbook staple until, in 1997, a biologist accused him again, and creationist advocates of intelligent design forced his figures out. How could the most controversial pictures in the history of science have become some of the most widely seen? In Haeckel's Embryos, Nick Hopwood tells this extraordinary story in full for the first time. He tracks the drawings and the charges against them from their genesis in the nineteenth century to their continuing involvement in innovation in the present day, and from Germany to Britain to the United States.Emphasizing the changes worked by circulation and copying, interpretation and debate, Hopwood uses the case to explore how pictures succeed and fail, gain acceptance and spark controversy. Along the way, he reveals how embryonic development was made a process that we can see, compare, and discuss, and how copying - usually dismissed as unoriginal - can be creative, contested, and consequential. With a wealth of expertly contextualized illustrations, Haeckel's Embryos recaptures the shocking novelty of pictures that enthralled schoolchildren and outraged priests, and highlights the remarkable ways these images kept on shaping knowledge as they aged. 202 colour plates, 2 tables

Nick Hopwood is reader in history of science and medicine in the Department of History and Philosophy of Science at the University of Cambridge.