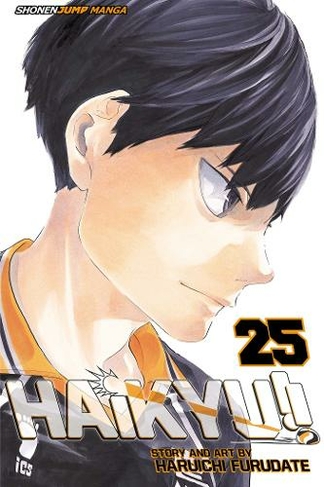 By Haruichi Furudate (Author)
Paperback
https://www.whsmith.co.uk/products/haikyu-vol-25-haikyu-25/haruichi-furudate/paperback/9781421598079-12-000.html £5.94 rrp £6.99 Save £1.05 (15%)
GBP
Availability
In Stock
Free Delivery Available When You Spend £25 Or More
Details
Spend £25 on eligible products to receive free standard delivery to home or free next working day click and collect to store
Share

Shoyo Hinata is out to prove that in volleyball you don't need to be tall to fly! Ever since he saw the legendary player known as "the Little Giant" compete at the national volleyball finals, Shoyo Hinata has been aiming to be the best volleyball player ever! Who says you need to be tall to play volleyball when you can jump higher than anyone else? Hinata may not have been allowed to participate in the Miyagi Prefecture Rookie Camp, but he's determined to learn something from watching on the sidelines as a ball boy! Meanwhile, thanks to the other players at the All-Japan Youth Camp, Kageyama starts to worry about how he interacts with his teammates. Then, with the Spring Tournament looming ever closer, Date Tech arrives at Karasuno for a practice game! The manga behind the hit volleyball anime about a boy who has a dream to overcome his physical limits and fly. 0

Haruichi Furudate began his manga career when he was 25 years old with the one-shot Ousama Kid (King Kid), which won an honorable mention for the 14th Jump Treasure Newcomer Manga Prize. His first series, Kiben Gakuha, Yotsuya Sensei no Kaidan (Philosophy School, Yotsuya Sensei's Ghost Stories), was serialized in Weekly Shonen Jump in 2010. In 2012, he began serializing Haikyu!! in Weekly Shonen Jump, where it became his most popular work to date.