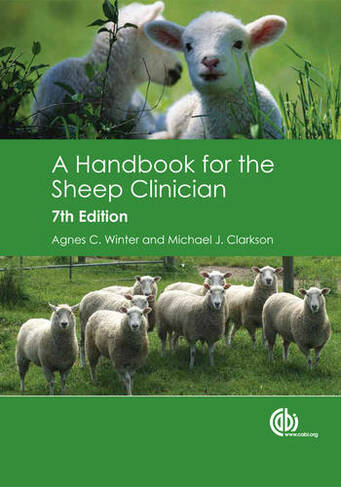 Handbook for the Sheep Clinician, A: (7th edition)

An established favourite with veterinary and agricultural students and a valuable addition to the library of any veterinarian or sheep farmer, this handbook covers the basics of sheep medicine and production. Geared at being an on-farm reference, it concisely conveys all of the fundamental information for the treatment of sheep worldwide. In this fully updated and revised seventh edition, topics covered include reproduction, vaccination, pregnancy and newborns, lameness, parasites, diseases, neurology and health promotion. An emphasis on diagnosis and treatment combined with short, easily digestible chapters and step-by-step diagrams makes this book an essential practical guide to recognising, treating and preventing disease.

grew up on a small family farm in the Yorkshire Dales. After graduating from Liverpool Veterinary School she worked in mixed practice in north Wales where her interest in farm animal work, in particular with sheep, developed further. With her Welsh farmer husband she kept a flock of sheep, including a small flock of pedigree Wensleydales with which she had considerable success in the show ring. After some years she returned to Liverpool Veterinary School to undertake a PhD supervised by her co-author Michael Clarkson. After completion of this she became a lecturer, and later senior lecturer, in sheep health. For the last four years of her academic career she was head of the Clinical Department and, on retiring, was made an Honorary Professor in the University. She remains an active member of the UK Sheep Veterinary Society, of which she was President from 1987-88. She has written five other books on various aspects of sheep health and disease and has received several prestigious awards for her contributions to the sheep industry. was born in Yorkshire and graduated from Liverpool Veterinary School. He undertook specialist studies in the Liverpool School of Tropical Medicine where he taught veterinary parasitology and did research on turkey coccidiosis, cattle trypanosomiasis, liver fluke infection in cattle and sheep and a number of zoonotic infections, especially hydatid disease. Michael has worked in several countries including Kenya, Zambia, Peru, Chile and Libya. He was appointed Professor of Farm Animal Medicine by Liverpool Veterinary School and studied the epidemiology of a number of important sheep diseases including parasitic gastro-enteritis, chlamydial and toxoplasma abortion and fasciolosis and continued his interest in hydatid disease. He taught sheep and cattle medicine and worked on a number of sheep farms developing sheep health programmes. He was appointed Emeritus Professor on his retirement and still undertakes research work at the Veterinary School. He has been a member of the UK Sheep Veterinary Society for many years, edited its Proceedings for 25 years, and was President of the Society from 1986-87.