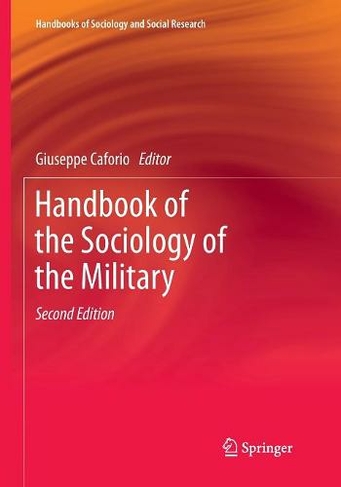 Handbook of the Sociology of the Military: (Handbooks of Sociology and Social Research Softcover reprint of the original 2nd ed. 2018)

This new edition of the volume is presented on the wave of the success which had its first edition (2003). It is entirely updated to the current situation of the disciplines covered, and expanded with particular regard to the new missions, that have become the main challenge for the armed forces in these first decades of the new millennium, with new insights to technological development toward so-called cyborg warriors, new forms of leadership and changes in soldier's identity and organisational culture. It is compiled of documents coming from various researchers at universities around the world as well as military officers devoted to the sector of study. Covered in this volume is a historical excursus of studies prior to contemporary research, interpretive models and theoretical approaches developed specifically for this topic, civic-military relations including issues surrounding democratic control of the armed forces, military culture, professional training, conditions and problems of minorities in the armed forces, an examination of the structural change within the military over the years including new duties and functions following the Cold War. 22 Illustrations, black and white; XIII, 650 p. 22 illus.

Giuseppe Caforio was a professional officer of the Italian Army. Born in 1935 he served untill his retirement in 1992, then devoting himself to social research on the military, as it is demonstrated by his scientific memberships and production untill his sudden death in 2015. Deputy President of the Italian Centro Interuniversitario di Studi Storico-Militari since 1984, founding member of ERGOMAS since 1986 and then ERGOMAS Board member and Coordinator of the Working Group on the Military Profession, in 1988 he became member of the IUS and of the RC01 of the ISA, where he served as President of the ISA RC01in 1998 since 2010, and as Board Member until his death. He organized more than ten international conferences and participated with papers in more than one hundred seminars, congresses and conferences. He has 160 scientific publication (volumes, journal articles and essays, contributions in volumes and edited books), many of them translated into nine different languages.Marina Nuciari is full professor of Sociology at the University of Torino, Italy, and professor of Military Sociology at the School for Strategic Studies, State University of Torino & Italian Army Academy. Founding member of the European Research Group On Military And Society (ERGOMAS), and Chairperson of ERGOMAS 1992 - 1996; Member of the Inter-University Seminar on Armed Forces and Society (IUS) , Chicago University (Chicago) since 1993 and of the International Sociological Association (ISA), Research Committee 01-Armed Forces and Conflict Resolution. Main fields of research activity: Military sociology, with special reference to the military profession, changes in military organisations, adjustment to asymmetric and CR operations; social change, development and modernisation, with special reference to African countries; Crosscultural Studies in Management and Business; Smart Cities, ICT and sustainable development. Author and co-author of some 90 publications in books, chapters, articles and edited volumes.