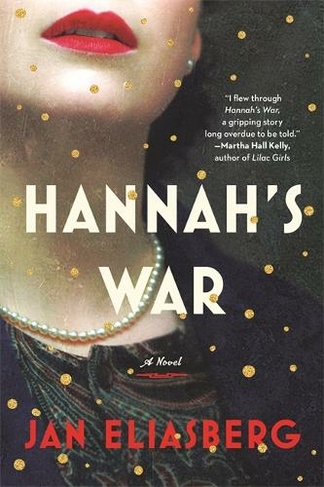 By Jan Eliasberg (Author)
Paperback
https://www.whsmith.co.uk/products/hannahs-war/jan-eliasberg/paperback/9780316537445-12-000.html £13.99
GBP
Availability
In Stock
Free Delivery Available When You Spend £25 Or More
Details
Spend £25 On Products To Receive Free Standard Delivery To Your Home Or Free Next Working Day Click And Collect To Store
Share

In 1945, Hannah Weiss, a Jewish-Austrian scientist, is removed from her laboratory at the Los Alamos National Lab and taken to Leavenworth Prison for interrogation. Major Jack Delaney, a rising star in the shadowy world of military intelligence, is convinced that someone in the United States has been sharing information with the Nazi party. The captivating, raven-haired, female scientist in New Mexico is his primary suspect. Across the globe, countries are racing to perfect the atomic bomb--a weapon powerful enough to stop WWII, and, perhaps, all future wars. But for Hannah, who has been sending mysterious postcards to a contact still in Germany, the trouble is just beginning. As Jack questions Hannah about her involvement with the infamous Kaiser Wilhelm Institute in Berlin ten years earlier, and her apparently friendly relationships with high-ranking members of the Nazi party, he slowly becomes seduced by her intelligence and quiet confidence. Is Hannah a Nazi spy, or is she protecting a far more personal and dark secret of her own? When Jack finally uncovers the truth about her life in Berlin before the war, Hannah must compromise her political allegiance, and choose between two lovers, and two versions of history. A vivid, page-turning, and inspiring re-imagination of the final months of World War II, and the brilliant researchers behind the first atomic bomb, Hannah's War is an unforgettable love story about an exceptional woman, and the dangerous power of her greatest discovery.

Jan Eliasberg is an award-winning writer/director. Her prolific directing career includes dramatic pilots for CBS, NBC, and ABC, such as Miami Vice and Wiseguy; countless episodes of television series, including Bull, Nashville, Parenthood, The Magicians, Blue Bloods, NCIS: Los Angeles, Supernatural, and dozens of others; as well as the feature film Past Midnight, starring Paul Giamatti, the late Natasha Richardson, and Rutger Hauer.Eliasberg also has a storied career as a screenwriter, writing films driven by strong female leads, including Fly Girls about the Women Air Service Pilots in WWII for Nicole Kidman and Cameron Diaz at FOX 2000, among many others.