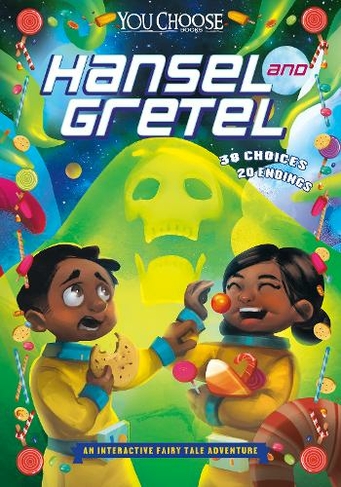 How much do you really know about the story of Hansel and Gretel? Was the witch that bad, or was she just sick of kids eating her out of house and home? Did Hansel and Gretel leave a trail of breadcrumbs, or did they leave space beacons behind as they explored the galaxy in their spaceship? Find your way through three different versions of the classic fairy tale. In this story, YOU CHOOSE how it ends. WIll you find your happily ever after?

Matt Doeden is a freelance author and editor from Minnesota. He's written numerous children's books on sports, music, current events, the military, extreme survival, and much more. His books Sandy Koufax (Twenty-First Century Books, 2006) and Tom Brady: Unlikely Champion (Twenty-First Century Books, 2011) were Junior Library Guild selections. Doeden began his career as a sports writer before turning to publishing. He lives in Minnesota with his wife and two children. Sabrina Miramon is a French artist and illustrator living in Cambridge, UK. She became a freelance illustrator in 2015. Since then she has worked on many international projects designing animation backgrounds, board games, and video games. Her clients include Ankara (Wakfu), Nickelodeon, Virgin Media, Asmodee, and Days of Wonder. When she's not working, Sabrina loves looking at pictures of fluffy dogs on the Internet and playing video games.