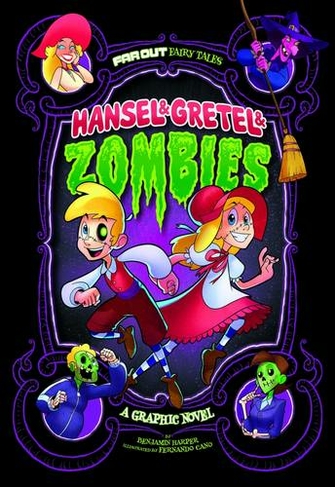 The Undead Family is out of brains to eat! Tourists have stopped visiting their home--a graveyard--for some time now, and the family of zombies is starving. So they venture into the Magical Forest, disguised as tourists, hoping to lure humans to an early grave! Unfortunately, an evil witch has other plans for the crepescular kiddies and sets up her own tourist trap . . .

Benjamin Harper has worked as an editor at Lucasfilm LTD. and DC Comics. He currently works at Warner Bros. Consumer Products in Burbank, California. He has written many books, including Obsessed With Star Wars and Thank You, Superman! Fernando Cano is an emerging illustrator born in Mexico City, Mexico. He currently resides in Monterrey, Mexico, where he works as a full-time illustrator and colorist at Graphikslava studio. He has done illustration work for Marvel, DC Comics, and role-playing games like Pathfinder from Paizo Publishing. In his spare time, he enjoys hanging out with friends, singing, rowing, and drawing.