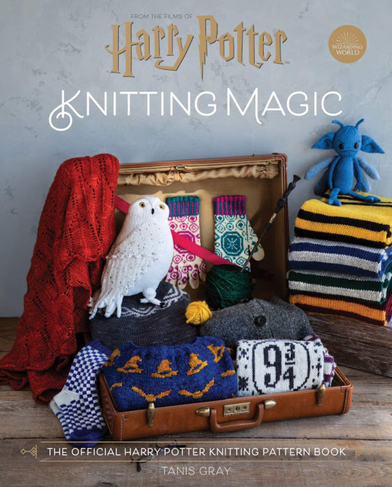 Introducing the first official Harry Potter knitting book - a deluxe guide to creating over 25 authentic Harry Potter knits based on the iconic films. Channel the magic of the Harry Potter films from the screen to your needles with the ultimate knitter's guide to the Wizarding World. Featuring over 25 magical knits, the book includes patterns for clothing, home projects and keepsakes pulled straight from the movies - and even includes a few iconic costume pieces as seen on-screen. With yarn suggestions based on the true colours used in the films, projects ranging from simple patterns like the Hogwarts house scarves to more complex projects like Mrs Weasley's Christmas jumper, knit your own wizarding world. Projects: Crafty Creatures: patterns for Hedwig; Cornish Pixie; Fluffy the Three-Headed Dog. Wizarding Wardrobe: patterns for Mrs Weasley's Home-Knit Christmas jumpers; and Hogwarts' house scarves. Inspired Apparel: clothes and accessories inspired by characters, artefacts and themes from the films such as a Expecto Patronum! mittens and Quidditch socks. Delightful Decor: dress your home with Harry Potter decorative accessories such as Hogwarts House mug cosies and Seven Horcruxes tea towels. A true fan must-have, this book also includes fun facts, original costume sketches, film stills, and other behind-the-scenes treasures. Harry Potter Knitting Magic is sure to have fans everywhere summoning needles, conjuring yarn, and practicing their best knitting wizardry. 150 photographs and 100 technical illustrations

A graduate of Rhode Island School of Design and mother of two, Tanis Gray is the author of nine knitting books including Gradient Knits, Cozy Knits, Knit Local, Wanderlust and 3 Skeins or Less and has over 500 published knitting designs. She has worked for Vogue Knitting, Martha Stewart, HBO, Focus Features, was a regularly featured guest on Knitting Daily TV, has multiple stranded colour work classes on Bluprint and teaches knitting worldwide.