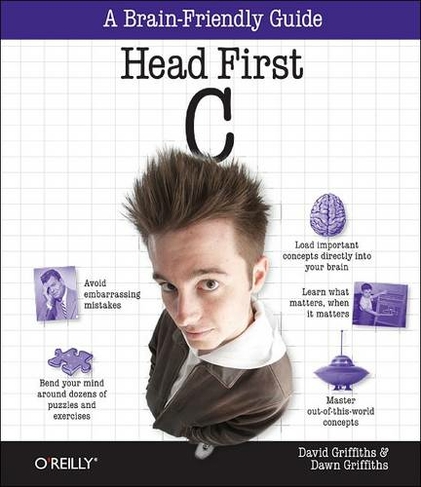 Ever wished you could learn C from a book? Head First C provides a complete learning experience for C and structured imperative programming. With a unique method that goes beyond syntax and how-to manuals, this guide not only teaches you the language, it helps you understand how to be a great programmer. You'll learn key areas such as language basics, pointers and pointer arithmetic, and dynamic memory management. Advanced topics include multi-threading and network programming - topics typically covered on a college-level course. This book also features labs: in-depth projects intended to stretch your abilities, test your new skills, and build confidence. Head First C mimics the style of college-level C courses, making it ideal as an accessible textbook for students. We think your time is too valuable to waste struggling with new concepts. Using the latest research in cognitive science and learning theory to craft a multi-sensory learning experience, Head First C uses a visually rich format designed for the way your brain works, not a text-heavy approach that puts you to sleep.

David Griffiths began programming at age 12, after being inspired by a documentary on the work of Seymour Papert. At age 15 he wrote an implementation of Papert's computer language LOGO. After studying Pure Mathematics at University, he began writing code for computers and magazine articles for humans and he is currently an agile coach with Exoftware in the UK, helping people to create simpler, more valuable software. He spends his free time traveling and time with his lovely wife, Dawn. Dawn Griffiths started life as a mathematician at a top UK university. She was awarded a First-Class Honours degree in Mathematics, and was offered a university scholarship to undertake a PhD studying particularly rare breeds of differential equations. She moved away from academia when she realized that people would stop talking to her at parties, and went on to pursue a career in software development instead. She currently combines IT consultancy with writing and mathematics. When Dawn's not working on Head First books, you'll find her honing her Tai Chi skills, making bobbin lace or cooking nice meals. She hasn't yet mastered the art of doing all three at the same time. She also enjoys traveling, and spending time with her lovely husband, David.