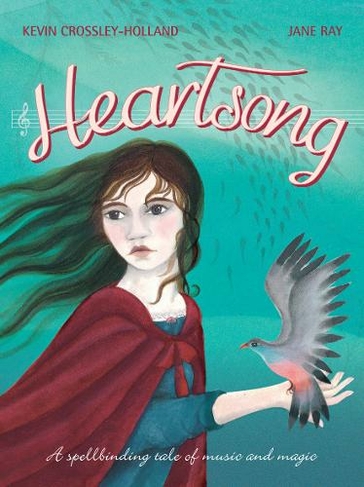 An orphan with no voice but an extraordinary musical gift. A man of music who discovers her gift. Heartsong is a spellbinding tale about the healing power of music, set against the mystery and beauty of Venice. "Destined to be a future classic" Manchester Evening News "This is a spectacular book... a quiet, heart-soaring triumph" Big Issue "A very special present for music-loving readers" The Times Abandoned at the orphanage in Venice as a baby, Laura has never spoken. Her life is transformed when the composer Vivaldi unlocks her passion for music. The seasons turn, dark turns to light and miracles happen. Carnegie award-winning author Kevin Crossley-Holland makes every word a master stroke. This short novel is exquisitely illustrated by acclaimed artist Jane Ray. Her work is inspired by Vivaldi's Four Seasons and the real girls and boys who lived and laughed and worked in the Venetian orphanage.

Kevin Crossley-Holland (Author) Kevin Crossley-Holland won the Carnegie Medal in 1985 for Storm. His many notable books for adults and children include poetry, classic retellings and anthologies. He has written and presented many BBC radio programmes and is a frequent speaker at schools and libraries. For some years he held a university post in Minnesota. He is a Fellow of the Royal Society of Literature. The Seeing Stone won the prestigious Guardian Children's Fiction Prize and At The Crossing-Places won a Silver award at the SWPA Spoken Word Awards. Gatty's Tale was shortlisted for the 2008 Carnegie Medal.Jane Ray (Illustrator) Jane Ray's truly exquisite artwork has gained acclaim both in the UK and internationally. She is one of the most talented and distinctive illustrators in the children's book world and regularly exhibits her work at various galleries. Jane won the Smarties Prize with The Story of Creation; The Story of Christmas was shortlisted for the Kate Greenaway Award; and A Balloon for Grandad was shortlisted for the Mother Goose Award. Jane's recent books for Orchard include the delightful and original fairy tale The Apple-Pip Princess, the heartwarming The Dolls' House Fairy and the fabulously festive Twelve Days of Christmas. Jane lives in London.