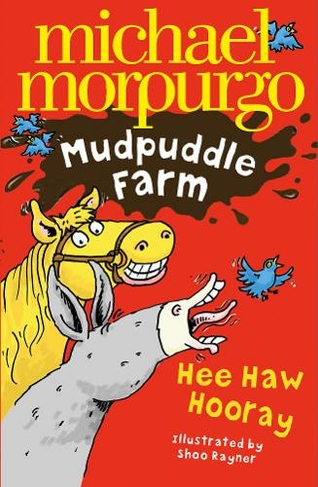 By Michael Morpurgo (Author)
Paperback
https://www.whsmith.co.uk/products/heehaw-hooray/michael-morpurgo/paperback/9780008241988-12-000.html £5.39 rrp £5.99 Save £0.60 (10%)
GBP
Availability
In Stock
Free Delivery Available When You Spend £25 Or More
Details
Spend £25 On Products To Receive Free Standard Delivery To Your Home Or Free Next Working Day Click And Collect To Store

Join the fun on the farm! A brand new Mudpuddle Farm book from award-winning author Michael Morpurgo, hilariously illustrated throughout by Shoo Rayner, and perfect for readers of 5 and up. Two charming stories for younger readers, featuring a loveable family of all sorts of animals, living behind the tumble-down barn on Mudpuddle Farm - where everything is about to change... in the most unexpected and hilarious ways! Nowt to Worry About: There's a storm in the air, and all the animals are worried. But old Farmer Rafferty doesn't realise anything is wrong. Can the animals warn him in time? Tickety-Boo: A funny new creature has arrived at Mudpuddle Farm - and the animals soon make friends. Problem is, the latest addition to the farm doesn't belong actually there! It looks like it's time to say a sad goodbye - although Albertine the Goose might just have a clever idea...

Michael Morpurgo OBE is one of Britain's best-loved writers for children, and has sold more than 35 million books around the world. He has written more than 150 novels and won many prizes, including the Smarties Prize, the Whitbread Award and the Blue Peter Book Award, while several of his books have been adapted for stage and screen, including the global theatrical phenomenon War Horse. Michael was Children's Laureate from 2003 to 2005, and founded the charity Farms for City Children with his wife, Clare. He was knighted in 2018 for services to literature and charity.