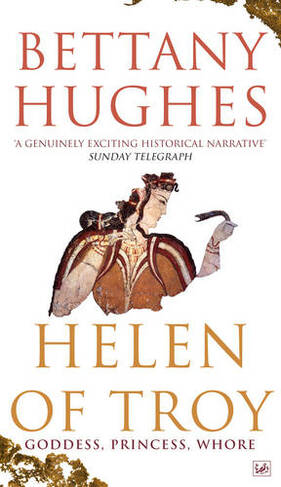 As soon as men began to write, they made Helen of Troy their subject; for nearly three thousand years she has been both the embodiment of absolute female beauty and a reminder of the terrible power that beauty can wield. Because of her double marriage to the Greek King Menelaus and the Trojan Prince Paris, Helen was held responsible for both the Trojan War and enduring enmity between East and West. For millennia she has been viewed as an exquisite agent of extermination. But who was she? Helen exists in many guises: a matriarch from the Age of Heroes who ruled over one of the most fertile areas of the Mycenaean world; Helen of Sparta, the focus of a cult which conflated Helen the heroine with a pre-Greek fertility goddess; the home-wrecker of the Iliad; the bitch-whore of Greek tragedy; the pin-up of Romantic artists. Focusing on the 'real' Helen - a flesh-and-blood aristocrat from the Greek Bronze Age - acclaimed historian Bettany Hughes reconstructs the context of life for this elusive pre-historic princess and places her alongside the heroes and heroines of myth and history. Through the eyes of a young Mycenaean woman, Hughes examines the physical, historical and cultural traces that Helen has left on locations in Greece, North Africa and Asia Minor. Vivid and compelling, this remarkable book brilliantly unpacks the facts and myths surrounding one of the most enigmatic and notorious figures of all time.

Bettany Hughes is an award-winning historian, author and broadcaster who has devoted much of the last twenty years to the vibrant communication of the past. Her first book, Helen of Troy: Goddess,Princess, Whore, was published to great critical acclaim and has now been translated into ten languages. Her latest work, The Hemlock Cup: Socrates, Athens and the Search For The Good Life, was short-listed for the Writer's Guild Award and was a New York Times bestseller. Bettany has written and presented over 30 factual films and radio documentary series for the BBC, Channel 4, PBS, Discovery, The History Channel and ABC for both the British and International markets including 'Divine Women', 'The Spartans', 'When The Moors Ruled in Europe', 'Athens: The Truth of Democracy', 'The Women of the Bible', 'Alexandria: The Greatest City' and 'Helen of Troy'. These have now been seen by over 150 million people worldwide. In recognition of her 'outstanding contribution' to history and historical research Bettany has been awarded the Norton Medlicott Medal for History. Bettany is a founding patron of the educational charity 'Classics For All', was the Chair of the Orange Prize for Fiction and advisor to The Foundation for Science, Technology and Civilisation. Bettany was a Scholar at Oxford University and holds a Research Fellowship at King's College, London. She lives in the UK and abroad with her husband and their two daughters.