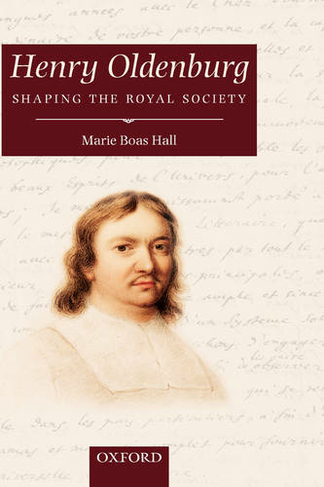 Henry Oldenburg, born in 1619 in Bremen, Germany, first came to England as a diplomat on a mission to see Oliver Cromwell. He stayed on in England and in 1662 became the Secretary of the Royal Society, and its best known member to the entire learned world of his time. Through his extensive correspondence, now published, he disseminated the Society's ideals and methods at home and abroad. He fostered and encouraged the talents of many scientists later to be far more famous than he, including Newton, Flamsteed, Malpighi, and Leeuwenhoek with whom, as with many others, he developed real friendship. He founded and edited the Philosophical Transactions, the world's oldest scientific journal. His career sheds new light on the intellectual world of his time, especially its scientific aspects, and on the development of the Royal Society; his private life expands our knowledge of social mobility, the urban society, and the religious views of his time. 1 halftone