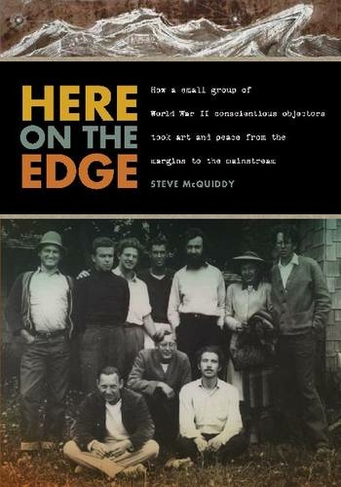 Here on the Edge: How a Small Group of World War II Conscientious Objectors Took Art and Peace from the Margins to the Mainstream

Here on the Edge answers the growing interest in a long-neglected element of World War II history: the role of pacifism in what is often called "The Good War." Steve McQuiddy shares the fascinating story of one conscientious objector camp located on the rain-soaked Oregon Coast, Civilian Public Service (CPS) Camp #56. As home to the Fine Arts Group at Waldport, the camp became a centre of activity where artists and writers from across the country focused their work not so much on the current war, but on what kind of society might be possible when the shooting finally stopped. They worked six days a week-planting trees, crushing rock, building roads, and fighting forest fires-in exchange for only room and board. At night, they published books under the imprint of the Untide Press. They produced plays, art, and music-all during their limited non-work hours, with little money and few resources. This influential group included poet William Everson, later known as Brother Antoninus, "the Beat Friar"; violinist Broadus Erle, founder of the New Music Quartet; fine arts printer Adrian Wilson; Kermit Sheets, co-founder of San Francisco's Interplayers theatre group; architect Kemper Nomland, Jr.; and internationally renowned sculptor Clayton James. After the war, camp members went on to participate in the San Francisco Poetry Renaissance of the 1950s, which heavily influenced the Beat Generation of Jack Kerouac, Allen Ginsberg, and Gary Snyder-who in turn inspired Ken Kesey and his Merry Pranksters, leading the way to the 1960s upheavals epitomised by San Francisco's Summer of Love. As camp members engaged in creative acts, they were ploughing ground for the next generation, when a new set of young people, facing a war of their own in Vietnam, would populate the massive peace movements of the 1960s. Twenty years in the making and packed with original research, Here on the Edge is the definitive history of the Fine Arts Group at Waldport, documenting how their actions resonated far beyond the borders of the camp. It will appeal to readers interested in peace studies, World War II history, influences on the 1960s generation, and in the rich social and cultural history of the West Coast. Black & white illustrations

Steve McQuiddy writes and lectures on Pacific Northwest history and culture, particularly the eccentric quarter. His monograph, The Fantastic Tale of Opal Whiteley, has been widely cited and reprinted, with an expanded version published in 2012. He has written for Salon, Mother Jones, Seattle Times, and Best Essays Northwest, and has been awarded by the Society of Professional Journalists. He is an honorary director of the Oregon Cultural Heritage Commission and currently teaches writing at Lane Community College in Eugene, USA.