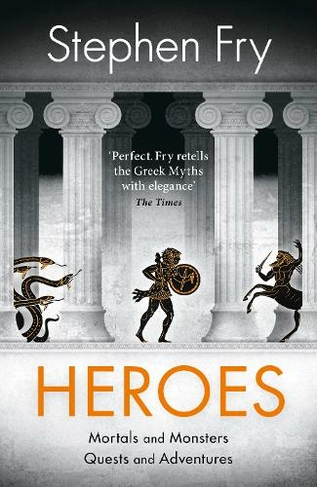 IMAGINE SANDALS ON YOUR FEET, A SWORD IN YOUR HAND, HOT SUN BEATING DOWN ON YOUR BRONZE HELMET. ENTER THE WORLD OF STEPHEN FRY'S SUNDAY TIMES BESTSELLER, HEROES In this companion to his bestselling Mythos, Stephen Fry gloriously retells the epic myths of the Greek heroes - which will be loved by young and old alike. 'An odyssey through Greek mythology. Brilliant . . . all hail Stephen Fry' Daily Mail ___________ Few mere mortals have ever embarked on such bold and heart-stirring adventures, overcome myriad monstrous perils, or outwitted scheming vengeful gods, quite as stylishly and triumphantly as Greek heroes. In this companion to his bestselling Mythos, Stephen Fry brilliantly retells these dramatic, funny, tragic and timeless tales. Join Jason aboard the Argo as he quests for the Golden Fleece. See Atalanta - who was raised by bears - outrun any man before being tricked with golden apples. Witness wily Oedipus solve the riddle of the Sphinx and discover how Bellerophon captures the winged horse Pegasus to help him slay the monster Chimera. Filled with white-knuckle chases and battles, impossible puzzles and riddles, acts of base cowardice and real bravery, not to mention murders and selfless sacrifices, Heroes is the story of what we mortals are truly capable of - at our worst and our very best. 'A romp through the lives of ancient Greek gods. Fry is at his story-telling best . . . the gods will be pleased' Times 'Assured and engaging. The pace is lively, the jokes are genuinely funny' Guardian 'An Olympian feat. The gods seem to be smiling on Fry - his myths are definitely a hit' Evening Standard 'Just as delightful and difficult to put down as the first. Heroes makes the stories relatable without skimping on the gory details, or sacrificing the truths of the myth. It's rich, it's funny and you'll feel like you've learned a lot' Herald ___________ If you like the sound of Heroes, you'll love Mythos - Fry's first foray into the enthralling world of Greek mythology. Praise for Mythos: 'Ebullient and funny' Times 'Entertaining and edifying' Daily Telegraph 'A rollicking good read' Independent 'The Greek gods of the past become relatable as pop culture, modern literature and music are woven throughout. Joyfully informal yet full of the literary legacy' Guardian

Stephen Fry is an award-winning comedian, actor, presenter and director. He rose to fame alongside Hugh Laurie in A Bit of Fry and Laurie (which he co-wrote with Laurie) and Jeeves and Wooster, and was unforgettable as General Melchett in Blackadder. He has hosted over 180 episodes of QI, and has narrated all seven of the Harry Potter novels for the audiobook recordings. He is the bestselling author of four novels - The Stars' Tennis Balls, Making History, The Hippopotamus and The Liar - as well as three volumes of autobiography - Moab is My Washpot, The Fry Chronicles and More Fool Me. Mythos and Heroes, his retelling of the Greek myths, are both Sunday Times bestsellers.