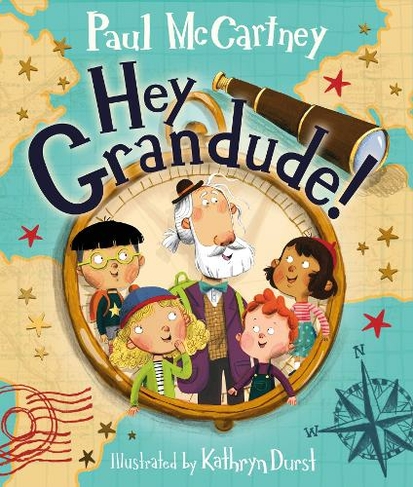 New York Times No.1 Bestseller From the legendary Paul McCartney - an action-packed picture-book adventure celebrating the fun grandparents and grandchildren can have when their imaginations run wild. See the compass needle spin - let the magic fun begin! Grandude is a one-of-a-kind adventurer - a Mary Poppins for the modern day! With his magic compass he whisks his four grandkids off on whirlwind adventures, taking them all around the globe . . . Join them as they ride flying fish, dodge stampedes in the Wild West, and escape snowy avalanches! Brought to life in a riot of colour by talented children's illustrator Kathryn Durst, it's the perfect story for little explorers. A charming tale from the music legend - with the most glorious illustrations that will be enjoyed by old and young - THE SUN Inspired by his own experience of being a 'Grandude' of eight, the picture book sees four youngsters and their grandfather travel the world on a host of magical adventures. Accompanied by Kathryn Durst's colourful illustrations, it's sure to take pride of place on any little one's bookshelf - OK MAGAZINE

Paul McCartney (Author) Paul McCartney's career has been impossibly prolific and singularly influential. In the 1960s Paul changed the world with The Beatles. He has continued to push boundaries as a solo artist and through collaborations with world-renowned artists. He has received 18 Grammys, and in 1997 was knighted by H.M. The Queen for his services to music. Paul is also a dedicated philanthropist and a very proud grandfather.Kathryn Durst (Illustrator) With a background in animation, Kathryn has interned with Pixar Animation Studios in addition to working with various children's book publishers. When she is not illustrating books, she may be found playing the accordion, growing vegetables, folk dancing or putting on shadow puppet shows. She lives in Toronto, Canada, with her grumpy mini dachshund named Chili Dog.