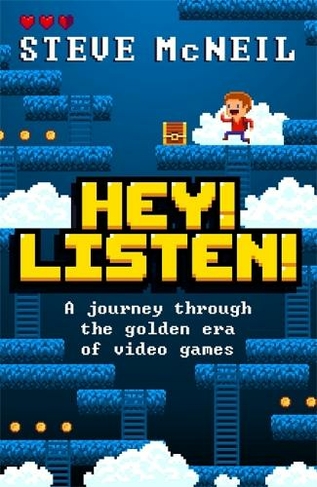 Hey! Listen!: A journey through the golden era of video games

Equal parts hilarious and informative, Hey! Listen! should be in every gamer's library. - Lucy James, (Gamespot) An informative, accessible romp through the early years of the games industry. All hail Il pirata pallido; the gaming hero we never knew we needed. - Adam Rosser BBC Radio 5Live Steve McNeil is funny, knowledgeable, and a massive, shameless, nerd. His brilliant book reminded me just how much of my life I've wasted. If the Golden Age of Gaming is a horse, then Steve's book is the stable. - Paul Rose (aka Mr Biffo), Digitiser A thoroughly enjoyable look at the early days of video gaming - comprehensive and fun. Loved it! - Stuart Ashen (aka ashens) The 'A La Recherche du Temps Perdu' of the gaming community. The 'A La Recherche du Temps Pew-Pew-Pew', as it were. - Dara O'Briain If 'Games Master' was a Nobel title passed on through the ages like 'Duke of York' or 'Rear of the Year' rather than simply the name of a 90s magazine and TV show then Steve McNeil would surely be the current holder of the esteemed position. What I'm saying is, he knows a LOT about games... - Scroobius Pip Taking us on a historical journey from the very early days all the way through to the late 1990s the book tells the stories of the men and women behind some of the most wonderful (and occasionally awful) games of the golden age, the fierce rivalries, bizarre business practices and downright bonkers risks taken during the pioneering days of computer and video gaming. This informal yet extremely well-researched book manages to educate and entertain in equal measure and this - dare I say - well-informed retrohead actually learnt a good deal. A thoroughly enjoyable read! - Mark Howlett (aka Lord Arse) Hugely funny, and full of fantastic facts about the history of video games. But enough about me; Steve's book is also quite good. - Ellie Gibson, Eurogamer A hilarious history of the golden period of computer games from the creator of Dara O'Briain's Go 8 Bit. It is fair to say Steve McNeil likes video games. He took a Nintendo Wii with him on his honeymoon (obviously), and spent so much time playing smartphone games in bed in the dark that he got eye strain and had to wear an eye patch. The locals nicknamed him 'the pale pirate'. Steve's obsession with video games can be traced back to the golden period from the early 70s to the late 90s. In this book he will delve into these games - from the appallingly bad to the breathtakingly good. He will also take us through the nerdy geniuses who created them, their fierce rivalries and risks often leading to some of the most farcical moments in the history of entertainment. This is a story of obsession, full of tales of Space Invaders, Donkey Kong, Mario, Sonic, Wolfenstein 3D, Worms and many more. It will also answer important questions about the golden age. Questions like: Why did Namco feel they had to change the name of Puck-Man to Pac-Man because they were worried about graffiti, when Nintendo were more than happy to bring out Duck Hunt? Joysticks at the ready. Let's do a gaming!

Steve McNeil is a stand-up comedian and creator of Dara O'Briain's Go 8 Bit, the most successful videogaming TV show of the last 15 years. He has appeared on more video gaming shows than anyone else in the UK. He has written for Time Out, Shortlist, Den of Geek and more. His live show 'WiFi Wars' has a residency at the Royal Insititution in Mayfair. He is a Twitch streaming partner, and in 2018 was nominated for streamer of the year at the UK ESPORTS awards.