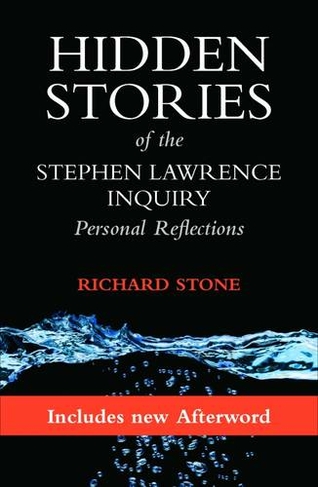 Young people who come into contact with police officers on the streets today have little idea of the significance of the stabbing to death of Stephen Lawrence in a racist attack in 1993. Only their parents or grandparents remember the daily exposures of police incompetence and indirect racism which were given high profile in the media for six months. The repercussions of the case are still ongoing with the long overdue conviction in 2012 of two of the original suspects, and in the same year a number of racist assaults by police. This accessible and engaging book includes analysis of hitherto inaccessible transcripts. These dramatically show how the Inquiry was undermined to the point of failure to produce the desired results. Dr Stone also discusses contemporary issues and the relevance of the Inquiry today. This paperback edition is updated with a new Afterword, including revelations about police surveillance on members of the public who attended the Lawrence Inquiry, Dr Stone's meeting with Mark Ellison QC prior to the release of his report on possible corruption and the role of undercover policing in the Stephen Lawrence case, and proposals for action on implementation of the agenda set by the Lawrence Inquiry. Hard-hitting and full of insightful detail, this book makes essential reading for academics, students, researchers and anyone interested in institutional racism, particularly in the police.

Dr Richard Stone was a panel member of the Stephen Lawrence Inquiry into racism in policing (1997/99) as Adviser to the judge Sir William Macpherson. He was then Chair of the Jewish Council for Racial Equality.His Independent Review of the Stephen Lawrence Inquiry 10 Years On (richardstonesli.wordpress.com) was launched by the Justice and Home Secretaries at their 10th anniversary conference in February 2009.For 20 years Dr Stone was senior partner of a general medical practice in London. For 14 years he worked with British Muslims as chair of the Runnymede Islamophobia Commission and in 2004 he founded Alif-Aleph UK (British Muslims and British Jews). In 2010 he was awarded the OBE for public and voluntary service.He is an Honorary Fellow of the Cambridge Centre for Muslim-Jewish Relations and an Honorary Research Fellow in the Dept of Criminology at the University of Westminster.