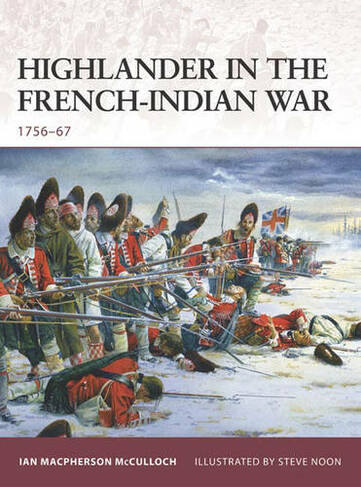 Colonial American historian Ian Macpherson McCulloch uses rare sources to bring to life the stirring story of the three Scottish Highland regiments that operated in North America during the French-Indian War (1754-1763). Forbidden to carry arms or wear the kilt unless they served the British King, many former Jacobite rebels joined the new Highland regiments raised in North America. Involved in some of the most bloody and desperate battles fought on the North American continent, Highlanders successfully transformed their image from enemies of the crown to Imperial heroes. The author pays particular attention to the part they played at Ticonderoga, Sillery, Bushy Run and on the Plains of Abraham, Quebec. Illustrations (some col.)

A former Deputy Director of History & Heritage for the Canadian Armed Forces and past commanding officer of the Black Watch (Royal Highland Regiment) of Canada, Lt Col McCulloch holds a graduate degree in War Studies from the Royal Military College of Canada. He is now serving as a NATO senior staff officer at Headquarters Supreme Allied Command Transformation in Norfolk, Virginia. He has written extensively for military history journals and magazines in Canada, the US and the UK. In 1998 he served as a historical consultant on CBC's Canada: A People's History, and has also appeared on A&E's Civil War Journal. Ian's latest book is Sons of the Mountains: The Highland Regiments in the French and Indian War, 1756-67 (Purple Mountain Press, 2006). The author lives in Virginia Beach, VA.