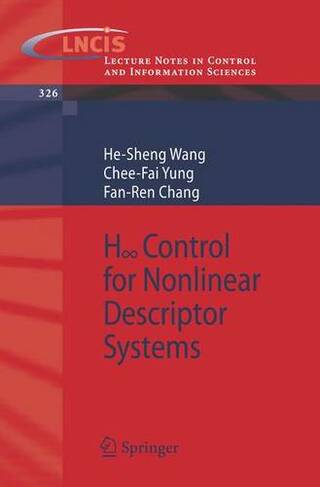 By He-Sheng Wang (Author), Chee-Fai Yung (Author), Fan-Ren Chang (Author)
Paperback
https://www.whsmith.co.uk/products/hinfinity-control-for-nonlinear-descriptor-systems-326-2006-ed/hesheng-wang/cheefai-yung/paperback/9781846282898-01-000.html N/A
GBP
Availability
Currently unavailable. We don't know when or if this item will be back in stock
Free Saver Delivery on orders over £20
Details
FREE SHIPPING over £20 for Saver Delivery
Share

Chee-Fai Yung has been with the Department of Electrical Engineering, National Taiwan Ocean University, where he is currently a Professor since August 1993. He was an Associate Professor with the Department of Electric Engineering, National Taiwan Institute of Technology from 1988 to 1999. He has been the editor of Journal of Nonlinear Studies since 2001. He received the Excellent Research Award in 2000 from the Taiwanese National Science Council. His main research interests are robust control, nonlinear control, H-infinity control, descriptor systems theory, PC-based real-time control and applications. From 1976 to 1981, Fan-Ren Chang was an assistant researcher of Chung Shan Institute of Science and Technology. He worked for missile and fire control system projects. He joined the Department of Electrical Engineering, National Taiwan University in 1985 as an Associate Professor. Since 1990, he has been a Professor at the same department. His research interests include linear multivariable systems, generalized systems, numerical algorithms, and satellite navigation systems.