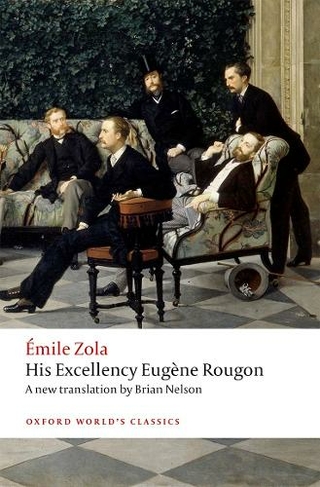 'He loved power for power's sake . . . He was without question the greatest of the Rougons.' His Excellency Eugene Rougon (1876) is the sixth novel in Zola's twenty-volume Rougon-Macquart cycle. A political novel set in the corridors of power and in the upper echelons of French Second Empire society, including the Imperial court, it focuses on the fluctuating fortunes of the authoritarian Eugene Rougon, the 'vice-Emperor'. But it is more than just a chronicle. It plunges the reader into the essential dynamics of the political: the rivalries, the scheming, the jockeying for position, the ups and downs, the play of interests, the lobbying and gossip, the patronage and string-pulling, the bribery and blackmail, and, especially, the manipulation of language for political purposes. The novel's themes-especially its treatment of political discourse-have remarkable contemporary resonance. His Excellency Eugene Rougon is about politics everywhere.

Brian Nelson is Emeritus Professor (French Studies and Translation Studies) at Monash University, Melbourne, and a Fellow of the Australian Academy of the Humanities. He has been editor of the Australian Journal of French Studies since 2002. His publications include The Cambridge Companion to Zola (CUP, 20017), Zola and the Bourgeoisie (Palgrave Macmillan, 1983), and translations of Earth, The Fortune of the Rougons,The Belly of Paris, The Kill, Pot Luck, and The Ladies' Paradise for Oxford World's Classics. He was awarded the New South Wales Premier's Prize for Translation in 2015. His most recent critical work is The Cambridge Introduction to French Literature (CUP, 2015).