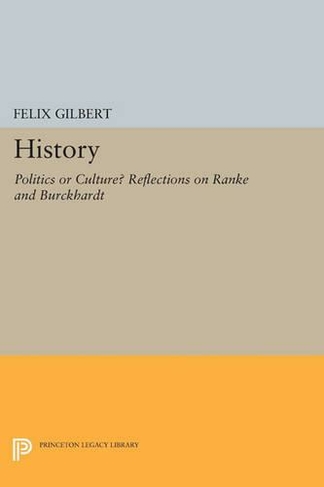 History Politics or Culture? Reflections on Ranke and Burckhardt

Leopold von Ranke (1795-1886), generally recognized as the founder of the school of modern critical historical scholarship, and Jacob Burckhardt (1818-1897), the great Swiss proponent of cultural interpretation, are fathers of modern history--giants of their time who continue to exert an immense influence in our own. They are usually seen as contrasts, Ranke as representative of political history and Burckhardt of cultural history. In five essays, each flowing gracefully into the next, the distinguished historian Felix Gilbert shows that such contrasts are oversimplifications. Despite their interest in different aspects of the past, Ranke's and Burckhardt's views arose from common elements in the first half of the nineteenth century, the time in which they grew up and in which their first masterworks attracted such wide attention. This concise volume clarifies the beginnings of history as an autonomous discipline, while forcing us to examine our views on basic questions in historical scholarship. In the case of Ranke, relating his work to his times counteracts the current tendency to disregard the difference between the historical concepts of the eighteenth and nineteenth centuries. By focusing on this difference, Gilbert emphasizes the originality and novelty of Ranke's ideas about history. Although Burckhardt is often portrayed as an intellectually lonely figure, this book reveals the importance of relating his thought to the intellectual trends of his time. Originally published in 1990. The Princeton Legacy Library uses the latest print-on-demand technology to again make available previously out-of-print books from the distinguished backlist of Princeton University Press. These editions preserve the original texts of these important books while presenting them in durable paperback and hardcover editions. The goal of the Princeton Legacy Library is to vastly increase access to the rich scholarly heritage found in the thousands of books published by Princeton University Press since its founding in 1905.