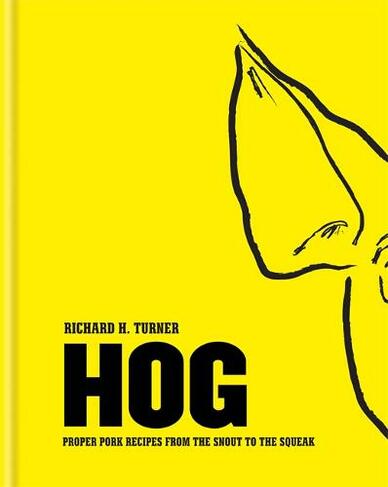 Hog Proper pork recipes from the snout to the squeak

'If you're after advice on what to do with any cut you can think of, look no further.' The Caterer 'Hog is a bible for pork fans everywhere...the book celebrates the versatility, appeal and - most importantly - the taste of the pig.' Great British Food Hog is a celebration of all things pig - from breeds and rearing, to butchering and preparing, with techniques, features and more than 150 recipes for nose to tail eating. The comprehensive range of dishes includes hams, bacon, sausages, charcuterie, pates, confits, roasts, grills, hotpots, ragouts, pies, casseroles, scratchings, crackling, trotters and much more - with a foreword from Josh Ozersky and guest contributions from a range of British, American and International chefs and cooks including Diana Henry, Meredith Erickson, Judy Joo, Valentine Warner, Neil Rankin, Mitch Tonks, Fergus Henderson and Aaron Franklin. Over 600 photographs and illustrations

Chef Richard H. Turner is a man of many meaty pleasures. Classically trained by legendary chefs the Roux brothers, Pierre Koffmann and Marco Pierre White, these days he's up past his forearms in the London restaurant scene - from London's celebrated Pitt Cue Co., to Hawksmoor, Foxlow and beyond. He's also one half of the independent butcher and supplier of the best-quality British rare breed meat money can buy, Turner & George, plus he's the man who established NYC's Meatopia festival in the UK, Spain and beyond. As acclaimed food writer Diana Henry says, 'Richard Turner's food sends me'. He is simply the best chef working in meat cookery today.Find out more about Richard H. Turner's food and festivals on Twitter @RichardHTurner and at the following websites:Meatopia (@MeatopiaUK)www.meatopia.co.ukTurner & George (@TurnerandGeorge)www.turnerandgeorge.co.ukThe Hawksmoor (@HawksmoorLondon)www.thehawksmoor.comPitt Cue Co. (@PittCueCo)www.pittcue.co.ukFoxlow (@FoxlowTweets)www.foxlow.co.uk