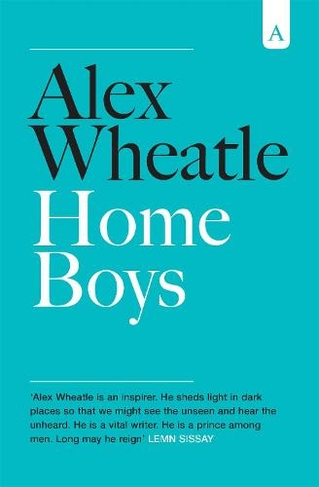 'Alex Wheatle writes from a place of honesty and passion with the full knowledge and understanding that change can only happen through words and actions' - Steve McQueen Four schoolchildren decide to run away from the the horrors of their everyday lives in a children's home. They seek asylum in the woods. And it is there they enjoy the exhilaration of freedom and the first flush of adolescence. Yet the forest slowly asserts its own power and what happens out in the wild will affect the four boys' lives forever. With his compelling narrative directness, rhythmic prose, and trademark humour, Alex Wheatle shows himself to be an author of real calibre, exposing the social stigma associated with children's homes, and the horrifying psychological consequences of their impact on children at the most sensitive stage. Never losing pace or failing to engage the reader at every moment, Home Boys is an unflinchingly honest depiction of disrupted childhoods.

Born in 1963 to Jamaican parents living in Brixton, Alex Wheatle spent most of his childhood in a Surrey children's home. He returned to Brixton in 1977 where he founded the Crucial Rocker sound system and performed his own songs and lyrics under the name of Yardman Irie. He spent a short stint in prison following the Brixton uprising in 1981. Following his release from prison he continued to write poems and lyrics and became known as the Brixton Bard.Alex's first novel, Brixton Rock, was published to critical acclaim in 1999. His books are on school reading lists and Alex takes part in Black History Month every year, working with Booktrust and the Children's Discovery Centre to promote reading. He is representing English PEN, and tours the country with his one-man show, Uprising. He teaches in various places, including Lambeth College, holds workshops in prisons and is frequently invited to schools to speak to students, inspiring a passion for literature with his own story.He was awarded an MBE in the Queen's Birthday Honours list for services to literature in 2008. A favourite of reading groups and libraries, he is the UK's most read Black British author. He is working on a non-fiction book about Black Britain and on Young Adult novels.