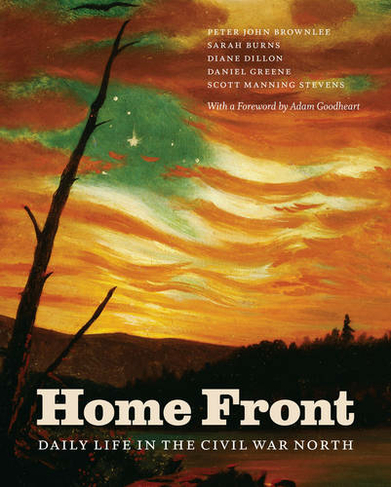 More than one hundred and fifty years after Confederates fired on Fort Sumter, the Civil War still occupies a prominent place in the national collective memory. Paintings and photographs, plays and movies, novels, poetry, and songs portray the war as a battle over the future of slavery, focusing on Lincoln's determination to save the Union, or highlighting the cruelty of brother fighting brother. Battles and battlefields occupy us, too: Bull Run, Antietam, and Gettysburg all conjure up images of desolate landscapes strewn with war dead. Yet battlefields were not the only landscapes altered by the war. Countless individuals saw their daily lives upended while the entire nation suffered. Home Front reveals this side of the war as it happened, comprehensively examining the visual culture of the Northern home front. Through contributions from leading scholars, we discover how the war influenced household economies and the cotton industry; how the absence of young men from the home changed daily life; how war relief work linked home fronts and battlefronts; why Indians on the frontier were pushed out of the riven nation's consciousness during the war years; and how wartime landscape paintings illuminated the nation's past, present, and future. A companion volume to a collaborative exhibition organized by the Newberry Library and the Terra Foundation for American Art, Home Front is the first book to expose the visual culture of a world far removed from the horror of war yet intimately bound to it. 90 colour plates

Peter John Brownlee is associate curator at the Terra Foundation for American Art. Sarah Burns is the Ruth N. Halls Professor Emerita in the Department of the History of Art at Indiana University Bloomington. Diane Dillon is director of the Scholarly and Undergraduate Programs Department at the Newberry Library. Daniel Greene is vice president for research and academic programs at the Newberry Library and an affiliated faculty member of the history department at the University of Illinois at Chicago. Scott Manning Stevens is director of the D'Arcy McNickle Center for American Indian and Indigenous Studies at the Newberry Library.