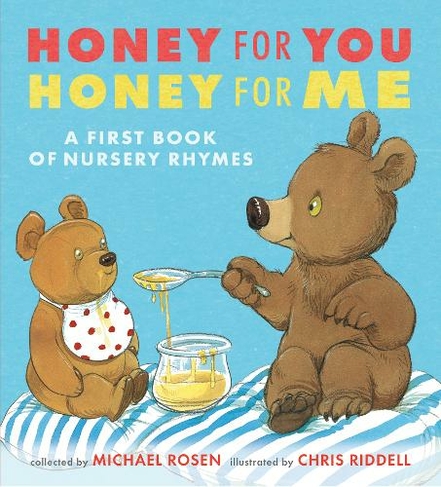 Honey for You, Honey for Me: A First Book of Nursery Rhymes

From Children's Laureates Michael Rosen and Chris Riddell, the bestselling team behind A Great Big Cuddle, comes a first book of nursery rhymes. Flying pigs, wobbling plates of jelly and a giant who trembles whenever he meets a mouse: welcome to the topsy-turvy world of nursery rhymes. Inspired by his lifelong fascination with these peculiar poems, Michael Rosen has placed familiar playground songs alongside forgotten gems for a seminal new collection. Brought to vivid life by Chris Riddell's magnificent pictures, expect familiar faces, from little Jumping Joan to Miss Mary Mack - but also plenty of surprises... With forty rhymes to choose from, this book is sure to prove a bedtime favourite. "Huggable and exuberant ... makes you want to smile and stomp to the rhythm." - The Sunday Times on A Great Big Cuddle

Michael Rosen is one of the most popular authors for children. His bestselling titles published by Walker Books include We're Going on a Bear Hunt, A Great Big Cuddle, Little Rabbit Foo Foo, Michael Rosen's Sad Book, Tiny Little Fly and What Is Poetry?. Michael received the Eleanor Farjeon Award for distinguished services to children's literature in 1997, and was the Children's Laureate from 2007 to 2009. He is a distinguished critic and academic, Professor of Children's Literature at Goldsmiths, University of London. He also presents radio programmes for the BBC, and is a political commentator. Michael lives in London.Chris Riddell is one of the country's finest children's book illustrators, and was Children's Laureate from 2015-17. He has won the Kate Greenaway Medal three times - for Pirate Diary, Gulliver's Travels and The Sleeper and the Spindle. He is a political cartoonist for the Observer and has collaborated with Paul Stewart on the extremely popular Edge Chronicles and Muddle Earth series. In recent years he has had success writing and illustrating his own books, including the Ottoline stories and Goth Girl and the Ghost of a Mouse, which won a Costa Book Award - and is currently working on an illustrated edition of J.K. Rowling's Tales of Beedle the Bard. Chris lives in Brighton.