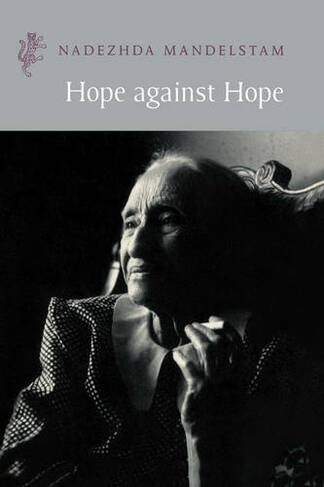 'Suddently, at about one o'clock in the morning, there was a sharp, unbearably explicit knock on the door. 'They've come for Osip', I said'. In 1933 the poet Osip Mandelstam- friend to Boris Pasternak and Anna Akhmatova- wrote a spirited satire denouncing Josef Stalin. It proved to be a sixteen-line death sentence. For his one act of defiance he was arrested by the Cheka, the secret police, interrogated, exiled and eventually re-arrested. He died en route to one of Stalin's labour camps. His wife, Nadezhda (1899-1980) was with him on both occasions when he was arrested, and she loyally accompanied him into exile in the Urals, where he wrote his last great poems. Although his mind had been unbalanced by his ordeal in prison, his spirit remained unbroken. Eager to solve 'the Mandelstam problem', the Soviet authorities invited the couple to stay in a rest home near Moscow. Nadezhda saw it as an opportunity for her husband to mend his shattered life, but it was a trap and he was arrested for the last time. 'My case will never be closed', Osip once said, and it is mostly through the courageous efforts of Nadezhda that his memory has been preserved. Hope against Hope, her first volume of memoirs, is a vivid and disturbing account of her last four years with her husband, the efforts she made to secure his release, to rescue his manuscripts from oblivion, and later, tragically, to discover the truth about his mysterious death. It is also a harrowing, first-hand account of how Stalin and his henchmen persecuted Russia's literary intelligentsia in the 1930s and beyond. Nadezhda Mandelstam spent most of the Second World War in Tashkent, living with her friend Akhmatova. Only in 1964 was she at last granted permission to return to Moscow. Here she began Hope against Hope, and later Hope Abandoned, the two memoirs of her life.

Nadezhda Yakovlevna Mandelstam was born in Saratov in 1899, but spent her early life in Kiev, studying art and travelling widely in Western Europe. She learned English, French and German fluently enough to undertake extensive translation work, which supported her in the hard years ahead. She met the poet Osip Mandelstam in Kiev in 1919, and they married in 1922. From then until Osip's death, her life was so inextricably linked with her husband's that without her extraordinary courage and fortitude most of his work would have died with him. She spent the Second World War in Tashkent, teaching English and sharing a house with her close friend the poet Anna Akhmatova. After the war she led an inconspicuous existence as a teacher of English in remote provincial towns. In 1964 she was granted permission to return to Moscow, where she began to write her memoir of the life she had shared with one of the greatest Russian poets of the twentieth century, and where she continued to preserve his works and his memory in the face of official disapproval. Nadezhda means 'hope' in Russian, and she herself chose the English titles for her two-volume memoirs. She died in 1980.