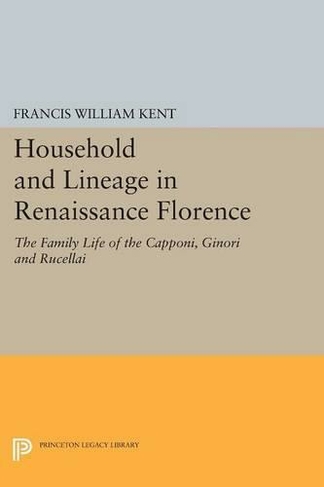 Household and Lineage in Renaissance Florence: The Family Life of the Capponi, Ginori and Rucellai (Princeton Legacy Library)

Professor Kent is concerned with one of the major questions posed by historical research on the later Middle Ages and the Renaissance: did these periods witness the nuclearization of the aristocratic family? Considering three celebrated and representative Florentine ottimati lineages, the author reconstructs the histories and activities of scores of their households for the period circa 1420-1550. The author describes the nuclear and extended households and the acknowledgement of kinship among the men and separate households of each patrilineage. His analysis indicates that the nuclear family and the clan cannot justifiably be regarded as opposing forms of family organization, each representative of a distinct historical era and social ambience. Professor Kent's study places Renaissance individualism in a wider, more corporate social context than that in which it has been traditionally viewed by historians. Originally published in 1977. The Princeton Legacy Library uses the latest print-on-demand technology to again make available previously out-of-print books from the distinguished backlist of Princeton University Press. These editions preserve the original texts of these important books while presenting them in durable paperback and hardcover editions. The goal of the Princeton Legacy Library is to vastly increase access to the rich scholarly heritage found in the thousands of books published by Princeton University Press since its founding in 1905.