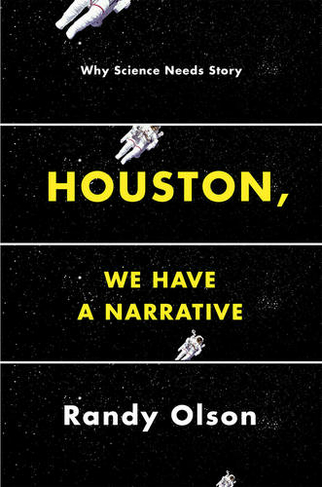 Houston, We Have a Narrative: Why Science Needs Story

Also available on eBook for £12.95. Click here to purchase from Rakuten Kobo

Ask a scientist about Hollywood, and you'll probably get eye rolls. But ask someone in Hollywood about science, and they'll see dollar signs: moviemakers know that science can be the source of great stories, with all the drama and action that blockbusters require. That's a huge mistake, says Randy Olson: Hollywood has a lot to teach scientists about how to tell a story-and, ultimately, how to do science better. With Houston, We Have a Narrative, he lays out a stunningly simple method for turning the dull into the dramatic. Drawing on his unique background, which saw him leave his job as a working scientist to launch a career as a filmmaker, Olson first diagnoses the problem: When scientists tell us about their work, they pile one moment and one detail atop another moment and another detail-a stultifying procession of "and, and, and." What we need instead is an understanding of the basic elements of story, the narrative structures that our brains are all but hardwired to look for-which Olson boils down, brilliantly, to "And, But, Therefore," or ABT. At a stroke, the ABT approach introduces momentum ("And"), conflict ("But"), and resolution ("Therefore")-the fundamental building blocks of story. As Olson has shown by leading countless workshops worldwide, when scientists' eyes are opened to ABT, the effect is staggering: suddenly, they're not just talking about their work-they're telling stories about it. And audiences are captivated. Written with an uncommon verve and enthusiasm, and built on principles that are applicable to fields far beyond science, Houston, We Have a Narrative has the power to transform the way science is understood and appreciated, and ultimately how it's done.

Randy Olson was a tenured professor of marine biology at the University of New Hampshire before moving to Hollywood and entering film school at the University of Southern California. He has written and directed a number of films, including the acclaimed Flock of Dodos and he is the author of numerous successful books, including Don't Be Such A Scientist.